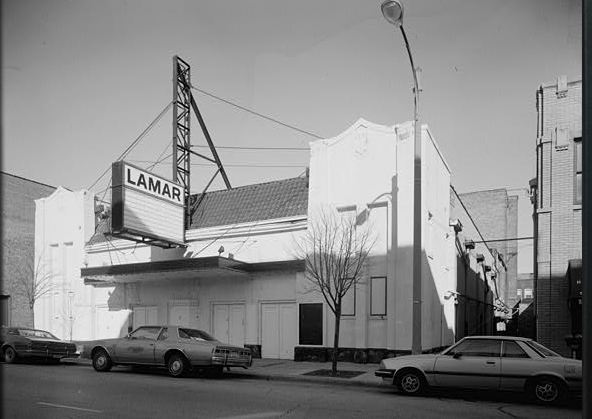 The Oak Park Theater opened in 1913, on what was then Wisconsin Street (now called S. Marion Street), which was once Oak Park’s entertainment district. Both the Warrington Opera House and the Playhouse Theatre were also on Wisconsin/Marion Street. It could seat over 1000, and featured both vaudeville acts and movies in its earliest years.

In 1919, its original owner, John Hodgson, collaborating with the Lubliner & Trinz chain, planned to tear down the six-year old theater and replace it with a massive hotel, theater and retail center, complete with a towering hotel and 5,000-plus seat theater, which would have been over twice the size of any of the largest of Chicago’s movie theaters at that time.

However, that grandiose plan fell through, and the Oak Park remained in operation, as a part of the Lubliner & Trinz circuit.

On August 29, 1930, it was remodeled in Art Deco style, and given a new name, the Lamar Theater, for its proximity to the corner of Lake Street and S. Marion Street. When the larger Lake Theatre opened not far away, on Lake Street in 1936, by then, that street had become the commercial center of the suburb, and the Lamar Theater’s days of being Oak Park’s leading movie house were soon to end.

However, it remained in business for decades, only closing in the early-1980’s. It was torn down in 1988.

The Lamar was the “grand old lady” of Oak Park Theaters. When I worked there in the early 1960’s (as well as the Lake Theater), it and the Lake Theater were both owned and operated by Essaness Theaters Corp. Saw many great films there.

I have wonderful memories of the Lake and the Lamar, but the Lamar always seemed to play my favorites—“MASH,” “Jesus Christ Superstar,” “Smokey and the Bandit,” and on and on. Someone correct me if I’m wrong, but I believe this theater showed Indian films (don’t think they were called “Bollywood” yet) in the early 80’s.

ESSANESS TALKIE THEATRES; A TRIPLE EVENT FOR CHICAGO! ATTEND THE OPOENING OF ONE OF THESE WONDER TALKIE THEATERS!

What memories the Lamar brings back! I worked there as an usher in the mid-70’s…a new movie had just come out named “Rocky”….we had it 16 weeks…and I can still remember every line from the film. We also wore red suit jackets with the name “Essaness Theaters” sewn on the breast pocket. It was very interesting to go backstage where the lights had to be thrown on and off manually on an old stage light board…and also go downstairs back there where the popcorn was stored in what used to be the dressing rooms for the vaudeville acts of the early days of the theatre. I miss you Lamar.

I wandered onto the rubble when the Lamar was being torn down. One thing I found was an empty 16mm film can for an Indian film. Interestingly enough, obviously the scenery hoisting equipment from live theater days was still in place in the old fly loft, so I was able to pick up 2 pulley wheels for my collection.

Two grand opening ads for this theatre has been uploaded in the photo section for this cinema.

August 29th, 1930 grand opening ad for the Byrd, Davis and Lamar theatres from the Tribune in the photo section.

On October 3, 1964 I walked from home to the Lamar with my sister Debbie and her friends. I was 5 years old, she was 8. I was the only guy in the entire theater that afternoon! Hundreds of screaming girls! They screamed all the way from the start of A Hard Day’s Night until the end. My ears were ringing and ringing. Great memories of being with my sister and her friends, seeing the Beatles on film, and stopping off at my fathers office at 210 Marion Street to tell him, his boss, and secretary about the film. For many years I would look at pictures at my parents home of the Lamar theater with my two sisters dressed as Girls Scouts and the old huge marquee that hung over the box office and doors that were taken during one of the Memorial Day parades on Marion street in the mid 1960’s. If my memory serves me well, the Lamar had a remodeling after my Dad took those pictures(marquee removed for good). Years later after my Dads passing, I hunted for those pictures for memories, but could not find the pictures or negatives.

I recall now that the Lamar theater had vertical neon lights that spelled out Lamar both on the north side and south side of the sign. The neon lights were red and shown brightly as that the Lake theaters original red, now blue. Also, in the mid 1960’s I remember that the lettering would go dark on certain vowels. The big rectangular marquee had numerous light bulbs that lit up the sidewalk underneath. One could see where the paint would pull up and flake off, around each light bulb. All this great look (similar to the Lake theater design) was all taken down and replaced by the signage that lacked any personality which you see in those black and white pictures before the Lamar was torn down. Again I wish I could find a picture that showed the Lamar from 1930-1966.

I finally found a photo of The Lamar Theater with the vertical neon lights that I had spoken of. The picture looks to be of Marion Street looking south from South Blvd( early1950’s?). This photo is part of an article about the Oak Park Theater circa 1916. This picture and the story of pre-Lamar can be read on Drypigment.net. “Tales From a Scenic Artist and Scholar. Part 931- March 14, 2020” by Wendy Waszut-Barrett, PhD.