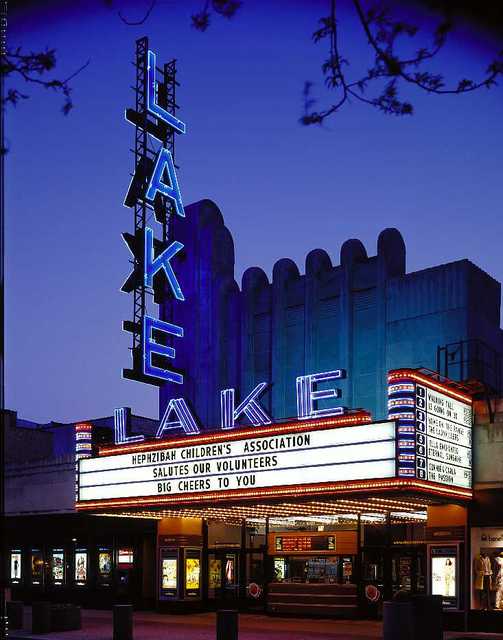 This classic theatre in the western suburb of Oak Park is one of the best examples of an Art Deco style movie palace in the Chicago area. It opened on April 9, 1936 with Robert Donat in “The Ghost Goes West”. It had a seating capacity of 1,464.

Unfortunately in 1985, the large single-screen auditorium was triplexed, but some of the original elements were retained.

In the mid-1990s, the Lake Theatre expanded to seven screens by extending into a former retail space next door.

The sleek, neon-lit marquee and facade have been relatively untouched.

The theatre has two auditoriums equipped with digital projection and 3D.

Can anyone tell me what is the largest audiorium here? And how wide is the screen?

The Lake has fixtures from closed and demolished theatres. Per Classic Cinemas' website:

“Today the Lake is home to many decorative elements brought in from theatres that are no longer standing. The ceiling fixtures in the new lobby rotunda are from the Will Rogers Theatre, which stood at 5635 West Belmont until 1991.

Two plaster musician busts are from the demolished Southtown Theatre at 636 West 63rd Street. Fixtures in the transition lobby are from a 1930’s renovation of one of the Schock houses in Austin and were removed when that house was remodeled. In Theatre #1 the art deco wall fixtures were rescued from the Colonial Theatre in Marengo, Illinois, prior to its demolition. They were repainted and over half of the glass panels were replaced. In the main auditorium two large statues have been placed over the exitways. These 10-foot neo classic ladies were originally in the organ grills at the MARBRO Theatre, 4110 West Madison, Chicago. They were done in 1927 by Flavin."

I was in here on January 25, 2009. In the main theatre restroom foyer (in the basement), there is a water fountain which appears to be an antique. Is this water fountain original to the Lake or was it “imported” from another theater?

I believe it is original

It is original, except the piping. There used to be an identical one in the main lobby near were the butter dispenser is now.

This is a great theater that does good business. I like the sympathetic subdivision of the original theater and the use of old theater artifacts in the new construction. The original bathrooms were recently remodeled and I was surprised that they took out the old fixtures. The finished product looks like any new bathroom anywhere. I loved the old urinals that went to the floor. I wish they had left them alone. Old fixtures are fine as long as they are kept clean.

I still haven’t gotten the chance to get down here yet. Does anyone know what the new seats from the remodel are like?

I haven’t posted this yet, but

I got around to visiting this theater a few weeks ago to see “State of Play”. Wonderful theater. The decor & leather seats are really something. I plan to go back there and see “Angels & Demons” thursday. I emailed them earlier, and got the seat count.

To those that are tired of the mega-chains’s overpriced tickets and parking, visit The Lake. You won’t regret it.

I uploaded the grand opening ad from April 9th, 1936 in the photo section of this theatre.