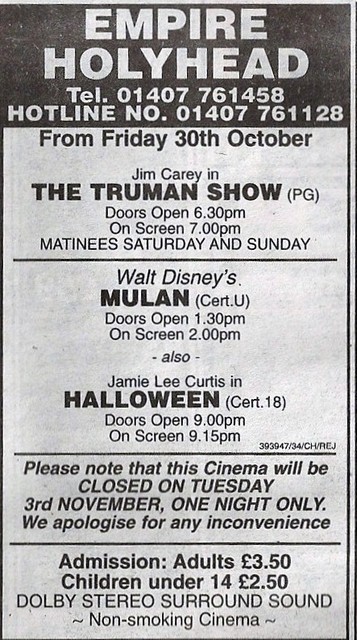 The Empire Cinema was built in around 1920, the facade being a partial rebuild of original stone houses that stood on the site. Seating was provided for 740, in stalls and circle levels. The proscenium was 30 feet wide.

In the 1970’s it was taken over by the Hutchinson Leisure Group of Burnley and the cinema was twinned to the plans of Modernisation Ltd. with 350 seats in the former stalls and 160 seats in the former circle. As the original projection box was at the rear of the stalls, a periscope system had to be installed to project into the circle screen. This proved to be inadequate and a new projection box was built at the rear of the former circle to serve that screen. It was later taken over by the Apollo Leisure Group.

In 1986, independent operators took over the running of the cinema. In November 1991, the downstairs screen was closed and it was converted into an amusement hall. On 29th February 1992, the former circle screen also closed with a screening of Dudley Moore in “Blame it on the Bellboy”.

It was taken over by the independent Focus Films, owned by Peter Moore, who operated three other North Wales cinemas in Bagillt, Denbigh and Festiniog. Promising to screen only family entertainment films, the former circle screen re-opened on 9th December 1994 with Walt Disney’s "The Lion King" and "Snow White and the Seven Dwarfs". This proved to be a short lived venture, as Peter Moore was arrested in 1995, charged as a serial killer for the gay murders of four young men. He stabbed to death the four young men ‘for fun’! In 1996, he was sentenced to a term of ‘life imprisonment’ and remains incarcerated in Wakefield Prison.

The Empire Cinema re-opened on 22nd August 1999, under the management of the independent South Wales Cinemas chain. It had undergone a complete refurbishment and opened with “Armageddon” in the upstairs screen, located in the former circle which seats 159. The former stalls area became the Regal Bingo Club, which closed in 2008. Unfortunately, the cinema closed shortly afterwards, and the pub chain J.D. Wetherspoon became interested in converting the building into one of their pubs. However, the renovation costs proved to be too much and they backed out.

The building was taken over by the local Council, and it was renovated, with the former stalls area/bingo club being converted into a children’s play area, and the Empire Cinema re-opened in the former circle area in November 2012.

The bingo Hall in the former stalls area of the building ceased trading in January 2008 due mainly to the downturn in people attending caused by the no-smoking ban. Although the situation of the cinema did look secure this also closed a few weeks later as the owner of the cinema due to the financial situation put the building up for sale.
Due to a huge local outcry and support from families and children on the Island and the nearest cinema being 64 miles away at Llandudno Junction the owner agreed to re-open the cinema in time for Easter school holidays in 2008.
Although the building remains for sale and in September the pub chain Wetherspoons expressed an interest in purchasing the building, thankfully this fell through, also an application by a multiplex operator to build a new complex on the Island also fell through.
Hopefully the cinema operation will continue for a long time until the fate of the building is determined.

What is happening with this cinema? Is it now closed and awaiting demolition/development or is it still trading?

The Empire has been refurbished by the Town Council, and is now operating as a cinema & play centre.

The cinema now has a second screen, but I think at the moment it’s still operating on just the one.