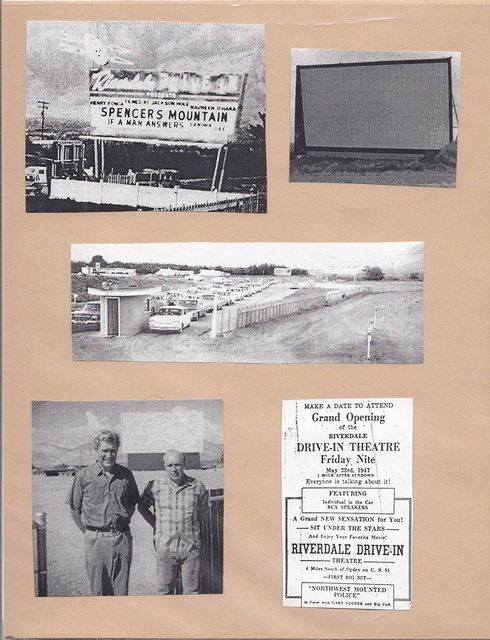 The Riverdale Drive-In opened on May 23, 1947 with Gary Cooper in Cecil B. DeMille’s “Northwest Mounted Police”. The owners and builders were Joy Naylor and Roy Tullis. The original address given for the $50,000 theatre was four miles south of Ogden off Highway 91 between Roy and Riverdale. The Ogden Standard-Examiner said that Naylor believed that this was the first theatre of its type in Utah and that more drive-ins were being constructed in Salt Lake City and others were being contemplated elsewhere.

Possibly, the Riverdale may have been Utah’s first drive-in as it beat out the Motor-Vu in Salt Lake, which opened two weeks later and Riverdale’s other drive-in, the Weber Motor-Vu, which opened on June 21.

Some important facts and dates in the Riverdale’s history:

– 350 cars was the original capacity, which was eventually increased to 800.

– The 1949 season, which began in March, saw a larger screen with hi-incandescent lamps and a remodeled snack bar.

– They began the 1950 season in February because of popular demand.

A second screen was added in August 1974.

The Deseret News says that the Riverdale Drive-In closed around 1992 and apartments were built on the site.

Boxoffice, Aug. 12, 1974: “ROY, UTAH – A second screen has been erected at the Riverdale Drive-In, which is being converted to a twin ozoner.”