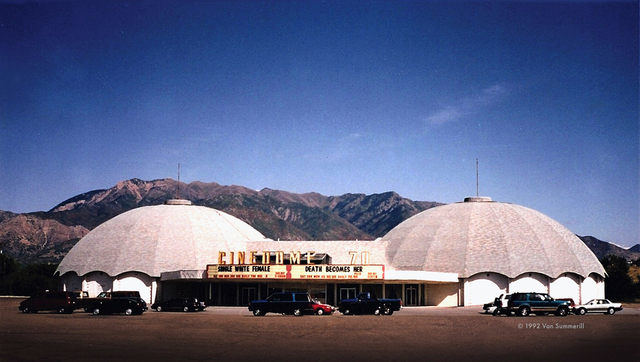 The Cinedome 70 had two domed auditoriums, one with 791 seats, the other with 738 seats and both with 70-foot curved screens. The theater opened May 15, 1970. It was built by the Tullis and Hansen families, who operated the theater until it was leased to Plitt Theaters in 1985.

In recent years, the theater fell into disrepair. Cineplex Odeon and Cinemark built new multiplexes in nearby Layton and Ogden, which caused attendance at Cinedome to drop. In anticipation of Cineplex Odeon’s impending bankruptcy, the owners terminated their lease with Cineplex Odeon on February 5, 2001 and tried to find new management for the theater.

Plans were proposed to convert the Cinedome into a private club with a liquor license, called the Rock ‘n’ Rodeo. At night, the theater would be a dance and concert hall. During the day, it would show second-run movies. This never happened and the Cinedome 70 was demolished in October 2010.

Thanks MarkG for the condition update. The building was recently sold and I hear they have plans to raze it for a car lot. (Yes – Riverdale needs more of those!) The county assessor puts the value of the property at only $678,921.00.

I’d still like to see “The Domes” saved. It is a very unique and rare style of theater. I believe there is enough interest that money could be raised (over time) to restore it. There is a Facebook group for sharing memories with over 350 members; I think there are hundreds (thousands?) more in the general public who would contribute to saving it. The first step would be just securing it from being torn down.

A restored theater wouldn’t have to compete with first-run theaters. It could be operated as a non-profit specialty theater hosting Indie movies, film festivals, movie premiers, concerts, etc., as well as first-runs. There are other theaters that are thriving on this model (ie: Egyptian Theater in Boise, Idaho). I’m willing to jump in and get this started. I just need to hear from ONE other person who thinks we should do it! Sadly, I think the public has rolled over on this one – even the original owner’s family hasn’t tried to save it (recently).

Well, I’m that one other person. But unfortunately I’m a person with no real money to spend on such a project. Iâ€\m just a regular working guy with a modest income. But I would be willing to invest the time if you have a way to get the money.

My personal interest is to own and operate a second run $1 theater like they used to have in the Newgate mall. Only in todayâ€\s market it would be more like $2.50 or $3. The intent would be to play relatively new movies, but movies that have already played at the major venues. Plus offering the standard concessions at more reasonable prices with the overall goal of being able to offer a family a night out at the movies for $20 or so.

I remember waiting for the good shows to come to the $1 theater and I think it would work again today.

If you wish to contact me I can be reached at

A Facebook group has formed – with over 2,400 persons signed on so far – with the intent of helping preserve this theater: View link

The Cinedome 70 was demolished today.

Would have loved to seen it. My favorite theatre in my hometown just got torn down. It’s like they ripped my heart out so many memories

When I was stationed at Hill AFB, we would frequent this theater on weekend nights because they would show favorites from the 80’s at midnight. I remember watching the first Raiders of the Lost Ark and Goonies to a packed audience. We also saw Independence Day in 1996 at this theater.