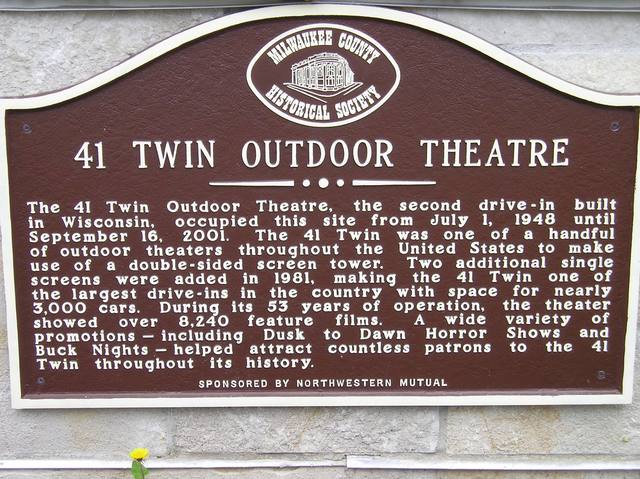 Opened July 1, 1948 with Joel McRea in “Four Faces West”. As the single screen the 41 Outdoor Theatre had a capacity for 1,000 cars. A year later it was twinned and became to 41 Twin Outdoor Theatre with another 1,000-car capacity. The "Twin" moniker was kept even after 2 new screens were added. The facility featured an ornate neon sign and drive-in screens.

The 41 Twin Outdoor closed in September of 2001. The large drive-in was still a thriving business, but sat on land that had become exceedingly valuable over the years. Demolition began in April 2002 as crews began clearing the way for a new office park for the Northwestern Mutual Life Insurance Company.

The concession stand caught on fire during its demolition. That’s insult to injury.

Here is a interesting Facebook page about a Documentary of the 41 Twin https://www.facebook.com/41TwinOutdoorTheater

Just posted the opening day movie ad. I hope somebody went and took pictures and documented the drive-in before it got demolished.

From what I have heard, the owners of Great Lakes Dragaway bought one of the newer screens(that they had added in 1981)before demo, and brought it back to the dragstrip property. They wanted to add a drive-in there along with the dragstrip but it never came to be. I hear the screen and its parts are still laying apart on the property. Anyone else out there hear about this also?

I uploaded some pictures from Charles Bruss, he nominated the 41 Twin Theater site to have a historical marker put there so it would never be forgotten. They accepted his nomination and gave him the honor of writing the text that appeared on the marker. It was placed in 2005, at the former site of the 41 Twin Outdoor and current occupant, Northwestern Mutual Life Insurance.

Update to my earlier post: I just talked to one of the owners of Great Lakes Dragaway last week. The screen that is currently on their property apart is from the old Wheeling Twin drive-in, not the 41 Outdoor.

Does anyone know why the concession stand caught fire during the demolition?

two vids of the demolition