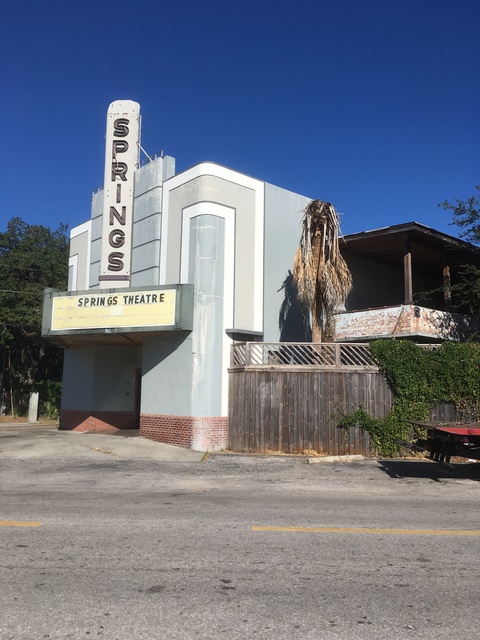 “Add beautiful and natural ambient reverb to your recording project … enjoy explosive percussion sound and lush vocals on our huge sound stage. Whether it’s an orchestral or choral recording, contemporary music or an independent film sound track, Springs Theatre will enhance your project.”

I need to research the original opening date for this theatre. A good friend tells me that she had moved to Tampa in 1945, the very same week the Springs Theatre had its grand opening. This date conflicts with the 1938 opening date given above. Will verify and post opening date soon.

Chuck, I just verified the opening date from the Tampa Tribune. The Springs Theatre opened on December 7, 1944. This resolves one question but creates another. What’s very interesing is that according to the Internet Movie Database, “Tarzan & the Amazons” was released on April 29, 1945. The April 1945 date of photo might be questionable. I say this because back during this period new Hollywood films would usually not open locally until a month or two following their release. Aside from this The Springs appears to have opened as a second-run double-feature theatre and yet the marquee shows this film as a single feature.

Going forward from the release date of April 29th, I tried locating the ad showing “Tarzan & the Amazons.” I searched through most of June but all ads are showing double features seven days a week. Obviously the film played here but when? This one needs a more in-depth search. I’ll post
the results as soon as I can track down when “Tarzan & The Amazons” actually played.

Thanks Nick and Mike.

I finally found the playdate for “Tarzan & the Amazons.” It played on August 24 and 25, 1945. I think the discrepancy on the April date could possibly be due to photo not having a date originally and was later dated based on the release month of the film playing. The newspaper ad lists the second feature as Bill Elliott in “Lone Texas Ranger” which appears on the marquee as a serial. So I guess what I had assumed were double features in the many ads I saw may have in fact been a single feature and a serial.

An interesting story about this theatre was told to me by a friend who was involved in the rebirth of the Springs Theatre in the early 1970s. I’ll add it to this page soon along with some additional history.

When Florida State Theatres closed The Springs as a commercial movie house sometime between the early-to-mid 1960s they stripped the theatre of all projection equipment including speakers, seating, screen, and the box office. Even the colored neon tube lights on the marquee were dismantled. The building remained vacant for some time and later reopened as The Springs Auction House.

Two friends of mine, a former union operator and his wife, had attended an auction one day and struck up a conversation with the auctioneer. They talked about the Springs Theatre and all the happy times they had spent watching movies here. They had courted in the theatre years ago and were eventually married so The Springs held many fond memories and was very dear to them. The auctioneer told them that he would like to operate a movie theatre, and would love to be able to reopen the building as The Springs Theatre once again, although he knew nothing about the business or how to go about acquiring equipment.

My friends said they would be willing to help him get the project off the ground. All they asked in return is that he hire a union operator for the booth. He told them that he would be agreeable to hiring a union man and wouldn’t even consider opening the theatre without one.

In my friend’s own words:

“I told him we could help him secure the projection equipment, the seats, a screen, a box office, and even neon tubing for the marquee lights. I could get all this equipment for him for practically nothing. The seats, speakers, and the box office came out of the old Lincoln Theatre on Central Avenue which had been closed for some time. I was even able to get him the colored neon tubing from the Lincoln’s marquee. The screen came out of a closed theatre in New Port Richey. The building’s owner had given us the keys and permission to go inside and retrieve the screen which cost us about $50. I brought my son and the auctioneer’s brother along to help me dismantle and roll-up the screen.

Off topic here: interesting to note (and this should make poster collectors cringe with horror) there was a closet in this theatre in New Port Richey that was filled with stacks of posters that had never been returned to the exchange. There was no room to transport them back to Tampa along with the rolled-up screen so they had planned on coming back for them at a later day. They finally made it back a few weeks later but when they opened the closet it was empty. The theatre had been cleaned out and renovated for stage performances. And whatever happened to those posters is anyone’s guess. They may have been either tossed in the dumpster or possibly whoever found them suspected them may be of value and grabbed them. Needless to say they were sick for days!

Back on topic: The projectors were originally from the Seminole Theatre on Florida Avenue but had been loaned to a small church-owned drive-in theatre located on Highway 19 in St. Petersburg. I contacted the man who had leased the projectors to the drive-in and arrangements were made for us to dismantle and transport them back to Tampa and install them in the booth at the Springs.

We hung the screen within the frame and it took me about two weeks to lace and tighten it working by myself for a few hours each day. There had been a small fire inside the building at one time and the tile around the concession stand had been stained with smoke residue. Some tiles had also fallen off the wall and were missing. My wife replaced the missing tiles using several that were still in place near the bottom inside of the concession stand. She cleaned the concession area as best as possible to try and bring out the shine it once had.

All in all we worked for several months installing equipment, repairing, cleaning, and outfitting the theatre to bring it back into presentable shape again. I explained how to book films from the distributor in Jacksonville, and also how to buy candy, popcorn, and other concession items from the concessionaire. I also advised him on the type of films to book that would bring in the crowds but he was mainly interested in the old westerns since they were cheap to book. I told him not to play too many films of the same genre too often. I said, “you can’t run westerns seven days a week and expect to draw crowds every day.”

He also wasn’t interested in running trailers since he didn’t want to pay the few extra dollars to book them. I told him he really should consider booking trailers along with the features so his audience will know what’s coming the following week but he prefered doing things his way.

And then he dropped the bomb! Just before the reopening he reneged on his promise to hire a union operator. I said to him, “after all that my wife and I have done to help you get this theatre running again and all the equipment I was able to get under the one condition that you promise to put a union operator in the booth, and now you tell me you don’t want a union operator in here. Well as far as I’m concerened I don’t ever want to talk to you again nor do I ever want to see you again.” Even after telling him this he had the nerve to ask, “you mean you’re not gonna help me out anymore?” I turned and walked out and never spoke to him again."

The grand reopening was held on Saturday, January 22, 1972. A local TV station and newspaper reporter were on hand to cover the event. The owner said in an interview that The Springs Theatre will be showing family movies, serials, and cartoons and we’ll even have the 5-cent bag of popcorn just like the good ole days. Admission was free for the Saturday grand reopening. The crowds came at the beginning but it wasn’t very long before attendance slowly began dropping off.

The Springs reopened with a double feature and a chapter serial:

The newspaper ads didn’t run daily. Every so often a small ad was published advertising the films for that day. These are some ads I was able to locate over the 6-month period the theatre was open:

“BIG GUN DOWN"
"TIME FOR KILLING”

Every so often a major attraction ran as a single feature. I occasionally saw ads for film such as “AIRPORT” and “TO SIR WITH LOVE.” He was able to keep it going for about 6 months. In July of 1972 ads began appearing for The Springs Adult Theatre. Adult films ran for many years until the theatre finally closed for good. The building later housed a print shop, and later a church. Today the building is home to an audio and video production facility. Jay Leno and Jennifer Lopez rehearsed here when Tampa hosted SuperBowl XLIII in 2009.

Here’s a link with some interior photos of the audio/video facility:
View link

Thanks Nick, The one-sheet story made me sick.Even with the population of Tampa playing “TROUBLE AT MEODY PASS” wasn’t going to sell many Tickets.Charlie did the right thing by walking.Wis he would have grabbed those ONE-SHEETS.

I remember doing a service call once it had converted to an Adult theater. A Horston 16mm theater projector was installed to run those shows.

This opened on December 7th, 1944. Grand opening ad in the photo section.