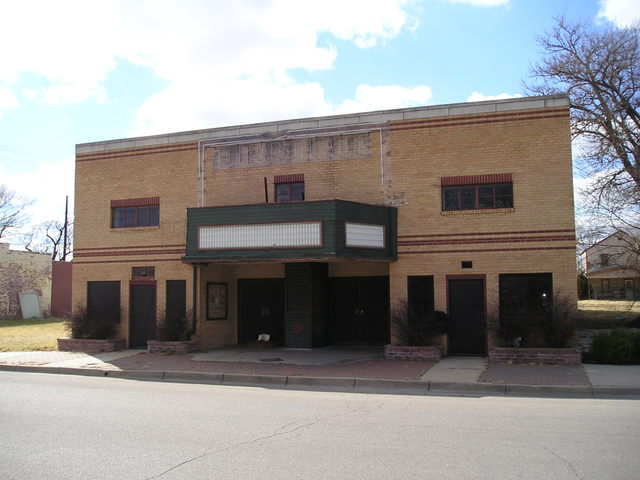 The Dunbar Theatre, designed by architect Raymond M. Harmon, opened on August 15, 1941 with Bing Crosby & Bob Hope in “Road to Zanzibar” & Frankie Darro in “The Gang’s All Here (aka In the Night). This theatre was built for African Americans. It was named after Paul Laurence Dunbar, an African American poet. It was taken over by Dickinson Theatres during World War II. It was leased out to independent operators in 1948. The Dunbar Theatre closed in 1963. In 2008 it was listed on the National Register of Historic Places. The building still stands but is vacant, but by 2022 renovations had begun to convert into an arts center.

I learned of this theater today when listening the mayor. I am excited to hear that there are discussions about preserving this theater. It is important to preserve as much of our history as possible.
annaelaine Wichita, Ks

The Dunbar Theater could reopen by 2020.

Here is the plan to reopen the Dunbar Theatre.

This was operated by Dickinson Theatres per the 1945 Film Daily Yearbook.

The Dunbar Theatre was at least Wichita’s second African American movie house. In the silent era, the Melrose turned Gilpin Theatre had launched on Main Street in 1921. It has its own Cinema Treasure page. The Dunbar Theatre launched for American Enterprises Inc. Circuit on August 15, 1941. The opening program featured Dorothy Lamour on the “Road to Zanzibar,” Mantan Moreland in 1941’s “The Gang’s All Here,” and a cartoon. The venue had Brenkert projectors and RCA sound at launch. Economical design by architect Raymond M. Harmon maximized safety and space usage in the 500-seat venue. The Dunbar was named for poet / author Paul Laurence Dunbar.

The venue at North Cleveland Street represented a shift of the hub of African American commerce and nightlife. That hub once existed from Water and South Main but began to gravitate to the North End / McKinley Park Neighborhood - especially on and near the Main Street area of the Neighborhood that thrived into the 1920s. Fading due to the Depression, the hub of African American nightlife moved slightly northward to Cleveland and Ninth Street area. (The North End / McKinley Park Neighborhood are known now as Old Town and McAdams neighborhoods.)

The Dunbar Theatre was taken on by Dickinson Theatres during World War II. The Dunbar participated in a city-wide World War II patriotic visit by Dororthy “Dottie” Lamour who came to Wichita on April 26, 1942 as part of the Victory Pledge campaign that also timed out with her feature film, “The Fleet’s In.” A neighboring ice cream parlor and nearby drug store served as de facto concession stands for many patrons prior to or after Dunbar movies, live shows, or community events.

Dickinson sold or leased the venue in 1948 - likely the latter as a 15-year subleasing agreement - to independent interests. The theatre continued to 1963. A downturn in the area led to the vacant property being condemned by the City of Wichita - a certain goner several time during and after urban renewal in which many similar era structures were eradicated. But the Dunbar remarkably staved off demolition due to great work by the community to save the historically relevant former theater. Starting in 1990, the building was designated as a local landmark and, in 2008, it was listed on the National Register of Historical Places. Power CDC purchased the Dunbar at auction for $25,000 and has been renovating the property since.

The building has been given vibrant murals on its outside, an infrastructure change on its interior, and a restoration of its marquee, attractor, and vertical blade. LK Architects created a design to move the gutted building into a vibrant arts center dedicated to African-American heritage in the Wichita area. Status - renovating.