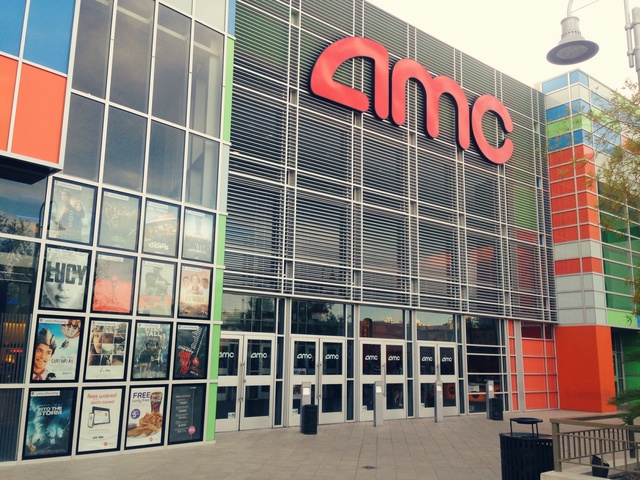 Located at the southern end of the ‘Strip’, not far from the Mandelay Bay Hotel & Casino is the newly built open-air Town Square shopping center. The Town Square 18 is at the rear of the center in its own stand alone building.

It opened on November 15, 2007 with "Beowulf" in one of the screens, presented in digital Real D 3D. All the screens have digital projection & sound and seven of them have 3D capability. Seating is provided for over 4,000 with capacities in the screens ranging from 470, down to 105. All have modern rocker seats installed in a stadium format.

It was operated by the Dallas, TX based; Rave Motion Pictures chain until January 2013, when AMC took over.

Soon to be part of the Cinemark chain. Most likely under the Century name like the others in town,though it would be nice to call it a Cinemark.

It may also be a regulatory issue; Cinemark/Century is already the major player in the greater Las Vegas area with five megaplexes and over eighty screens.

Naw. Regal has enough of a presence in the area to negate that. Though the Rave is usually the highest grossing theatre in Vegas, Regal has a number of strong competitors against existing Century locations.

However, DOJ or FTC may see the situation as an opportunity to strengthen the presence of another competitor against the dominance of both Regal and Cinemark/Century. When AMC absorbed Loews-Cineplex, regulators forced AMC to divest some of the former Loews-Cineplex theaters in places such as Chicago.

Another possibility may be the that Rave only leases Town Square property and that the landlord, for whatever reason, does not want to go with Cinemark or that Cinemark does not see the property as viable for some reason. Cinemark did not pick up the Rave CityPlace 14 in Kalamazoo though it is proposing to pick up Rave’s other theaters in Michigan.

This isn’t going to be one of the Cinemark acquired locations. This one is going to AMC (along with 9 others).

Auditoriums 1 & 2 were retrofitted in April 2016 for Dolby Vision at AMC Prime and IMAX 3D. Due to the retrofitting, the children’s party room and the additional snack bar were removed to make space to expand the auditoriums themselves.

coffee4binky – sorry that it irks you, but not everyone lives in your neck of the woods. you sound like you’re angry just to be angry.

Very mixed about this theater. The standards are actually horrendous - but the premium large formats, IMAX and Dolby Cinema are the best in the city, with the Dolby being the same size as the IMAX.