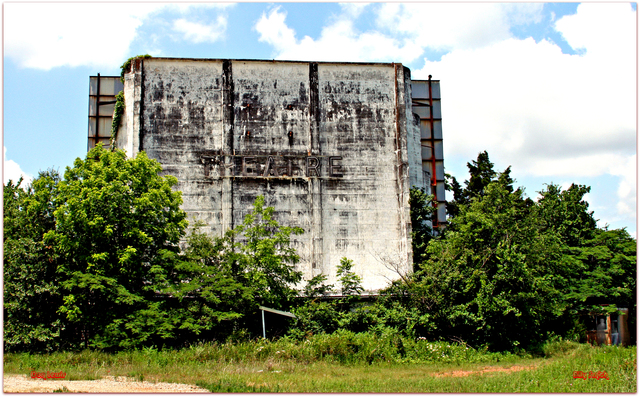 Lost Memory—-I correct you, i lived in Paris, and it is possible
someone tried to reopen the theater, but if they did, it would have been less than a month in operation.
..The theater was shut down in 1983, and the original owners are still around, and they seem to know nothing of its reopening.
..That don’t say much, but trust someone who is at least poutting these up for your derogitory remarks, Opps sorry, i forgot you know it all

derog-I-tory—Hey! you are alright, I guess i do liek you afterall
—IF YOU CAN’T TRUST A THEATER FREAK—WHO CAN YOU TRUST

This drive-in is located south of Hwy. 82 off North Main Street (Hwy 271) and north of Clement Road. The theatre is actually located on Drive-In Avenue!

From aerials if you zoom in, you can see both the old and newer screens (the newer placed in front of the older one).

Hi, I’m the grandson of Glenn Bell, the owner of the property that the theatre is on. He is the son of Wesley Bell who originally built and founded the theatre in 1947. I’ve been doing some research online for what information is available about the 271 Drive In, and I figured I would provide some clarity about the building and how it was founded.

As far as I know, there were five brothers in the Bell clan: Wesley, Elmer, Homer, Chester, and Henry. They were all brothers from Oklahoma. Two of the brothers had already opened a drive in somewhere around Grand, OK that was very successful. Wesley, Homer, and Henry flew over to Paris to begin constructing the theatre, and they later drove the rest of the Bell family, including my grandfather, from Grant to Paris to join them.

They lived in a couple of houses before finally settling down in a nearby house which still stands today. It was in a fire several decades back and is obviously unsuitable for living. What is interesting about the house itself is that it served as an army barracks for the nearby Camp Maxey during World War II. I believe the barracks were being sold as houses after the war and the Bells eventually purchased one to transport onto the property nearby the theatre.

Wesley, Glenn’s father, was the family genius. He commandeered the entire construction of the theatre along with Homer and Elmer. They even mixed and poured their own concrete for the screen. This was the first screen, originally built for the smaller aspect ratio screens. Once it was completed in 1947, the advent of the wide screen was introduced and they added on the wider metal screen.

Wesley died during his early 30’s due to an unknown disease that deemed him unable to walk. My grandfather had to grow up quickly, as a result. He learned how to drive at age 12 so he could drive Wesley around. As far as I know, Wesley was fairly feeble and light enough for my grandfather to carry him around. My grandfather soon became the man of the house, and he ran the theatre until it’s closing with his mother Francis and his brother Wesley Jr.

The property itself still stands today, though it was closed in the 1980’s. My grandfather owns all of the property to this day. My family runs a couple of businesses that have their offices in front of and next to the theatre itself. The theatre means a lot to our family, because it’s full of so much Paris history and our family legacy.