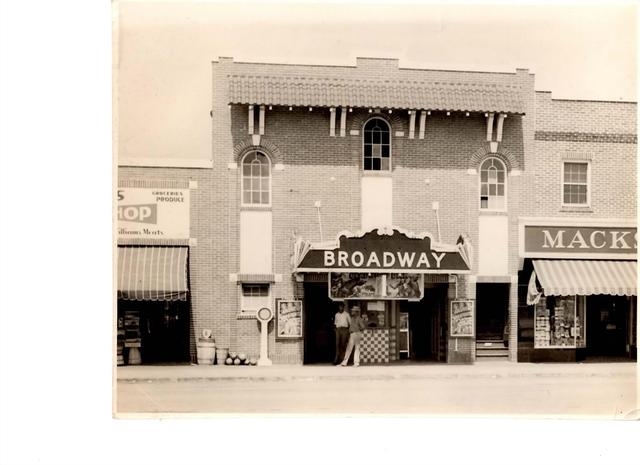 The Broadway Theater operated from at least 1940 into the 1970’s. In the mid-1970’s it was renamed Cinema, and continued into the 1980’s. The theater building is now home to Encore Video Productions.

The seating capacity for The Broadway Theatre is 496.

It remained in operations until the mid-to-late 1970’s.

I found a 10x8 B&W 1940 photo of the Broadway Theater and posted it today. It matches the vintage postcard streetscape that “lostmemory” posted.

Mid `50’s photo added courtesy of the Historic Horry County, SC Facebook page. I received the below e-mail content from the museum today.

The picture you mentioned was a photograph of a picture shown at a presentation given by Dino Thompson at the Museum. The Theater was located in downtown Myrtle Beach. Mr. Thompson forwarded me some information on it…

Ben’s Broadway theater opened in the late 30s. After it was sold it became Broadway Theater. In the late 60s or early 70s it became the Rocking Chair theater. Across the street from the theater was a restaurant owned by Louie Achilles called the Broadway Restaurant.

According to Jack Thompson, a Myrtle Beach photographer, The Broadway was located on Main Street next to the Kozy Korner and the Restaurant was 818 Kings Hwy next door to his studio.

Jack Thompson will be speaking this Saturday at the Horry County Museum about the history of Myrtle Beach through his photographs if you are interested. The program begins at 1:00 PM and is free.