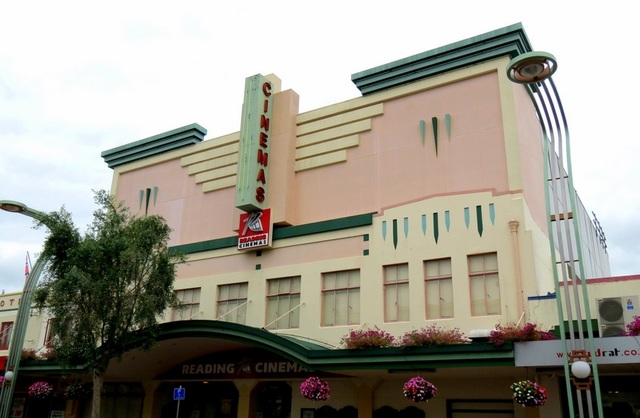 The State Cinema was built in the early 1930’s for the Donovan family. The cinema was built after the Napier earthquake, the front section being built in 1931 and the rear section two years later, it opened in 1933. In 1950, it is listed as being operated by Amalagamated Theatres Ltd.

It was modernised into a four screen cinema in the 1990’s and became the Reading Cinemas Hastings, showing first run movies. It was closed on 29th January 2012. It has since re-opened as the Focal Point Cinema & Cafe.

I wonder if Reading is in a big hurry to convert this to retail, or tear it down for an ugly hi-rise apartment building, the way they do in New York. It’s a good thing LM found a photo of its unusual facade, these people are known for remodeling with a jackhammer.

Yup, one and the same:
http://www.readingrdi.com

This has always been the State Theatre and was built for Amalgamated Theatres who always looked for vacant land behind retail so they could get cheaper rent and only pay prime rent on the shop-front access to the foyer/cinema behind. The Embassy was and is still standing 2 city blocks to the West on the other side of the rail line. There is no heritage listing on this building – all the art deco is fake. I took over the State from Hoyts in 2000 and was responsible for getting Dennis Donovan to build the 4plex. We split the original screen and lifted the roof over the shops and upstairs billiard room to create 2 new screens. It opened as a joint venture between myself, Village-Force and some local investors. We sold 50% to Movieland Group when Napier multi opened and operated the Twin cities as a JV. At a later date, Movieland acquired the remainder 50% they did not own and eventually sold the greater Movieland Group (6 locations)to Reading Cinemas who current lease this site.

Reading cinemas Hastings closed on 29/1/2012. Current use of building unknown?