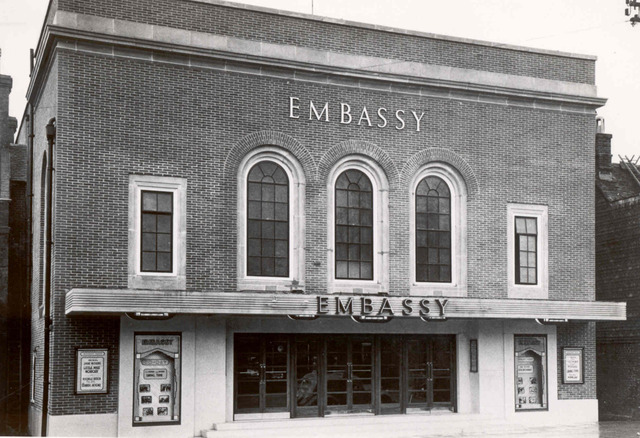 The Embassy Cinema opened on 11th February 1937 with Will Hay in "Windbag the Sailor". It was built for and operated by the Shipman & King circuit and they operated it throughout its life.

Designed in an Art Deco style, the square brick exterior is similar to the Majestic Cinema, Sevenoaks. The cinema was equipped with a cafe for the convenience of its patrons.

S&K closed the Embassy Cinema in 1969, and despite a 2,000 signed petition, it was converted into a supermarket for Vyes the grocers. It later became a Lo-Cost, then a Co-Op Supermarket and in 2009 operates as an M & Co. The original ‘Embassy’ name sign has been retained on the building.

A vintage set of photographs from David Stickland, who worked as a projectionist at the Embassy Cinema:
View link

Another photo of the cinema as a supermarket here:–

This photograph shows how the Embassy Cinema Tenterden might look as a twin screen venue. Although the interior has been gutted, the building could house a two or three screen digital cinema. However, this looks doubtful as the building is occupied by M&Co. The nearby town of Ashford (twelve miles) are planning to expand their multiplex because of increased custom. Instead of Tenterden cinema goers travelling to Ashford, Cineworld need to run an off shoot and manage the three screen operation in Tenterden. It depends on how long M&Co hold the lease on the Embassy building.

The former theatre converted to the M & Co. can be seen here.