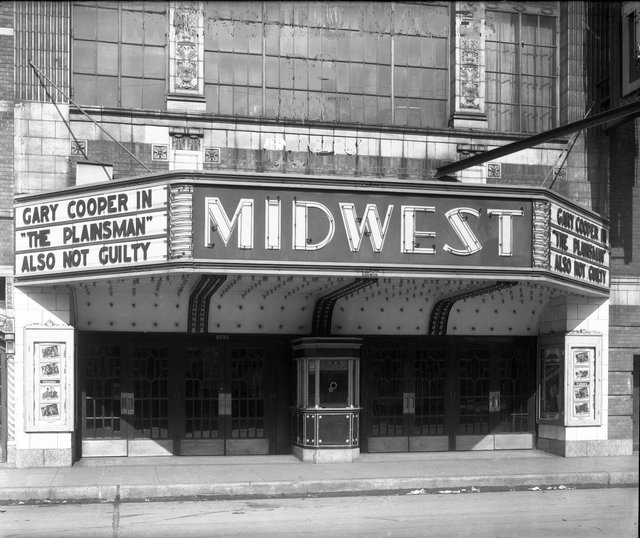 This McKinley Park neighborhood house opened in 1925 for the Schoenstadt circuit and sat around 1,700. It was located on Archer Avenue near Leavitt Street, not far from another Schoenstadt house, the Archer Thetare on 35th Street. It was designed by Edward P. Rupert of architectural firm R. Levine & Co. and presented both vaudeville and motion pictures in its early years. The theatre also originally contained a Barton organ. Following a period of closure it was reopened on September 16, 1933.

The Midwest Theatre closed in 1965 and was demolished shortly after.

I believe my guess from April 2006 is actually correct as the Archer was built well before 1925. Likely the Midwest was originally supposed to replace the Archer for Schoenstadt, which would explain why it would be the New Archer. The plan probably changed when they decided to retain the Archer.

Also, a March 20, 1936 Tribune article states that the assistant manager, Iving Fehlburg, was murdered by patron Peter Krisoulas in the theater office. Krisoulas feared that Fehlburg would have him arrested for molesting a girl in the theater.

The theater was between Hamilton and Leavitt, on Archer Avenue, the entrance closer to Leavitt. In its last few years they would have these great Halloween events where they ran the original Universal monster movies such as Frankenstein, Dracula, The Wolfman and the Bride of Frankenstein and also have a magician up front on the apron of the stage, in front of the screen. Once the films would start they would give the ushers hairy, creepy, gloves and they would sneak down the aisles and run their hand over your head or arm with the ‘monster’ gloves and the screams would erupt around the theater. I also saw most of the, Hammer Films versions of those mosnter films as first runs at the Midwest. One of the last films I saw there was The Family Jewels with Jerry Lewis, shortly before the theater closed in 1965. It was replaced by an A&P grocery store, which if memory serves survived 5 years tops, maybe less, before it closed down. That building then sat vacant for, I think, a couple of years before the Unique thrift shop moved in.

Let me correct myself, the entrance was closer to Hamilton Avenue, not Leavitt Street.

Anyone up for an ice cream soda across the street after the show?

An item in the November 28, 1925, issue of Motion Picture News listed the Midwest Theatre as one of three recently opened houses that had been designed by the firm of R. Levine & Co. Edward Rupert was one of the firm’s architects. The company was very active. One source I came across said that R. Levine & Co. built 27 theaters in 1926.