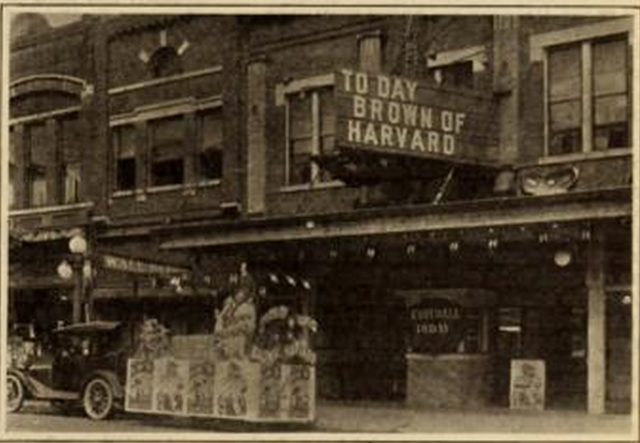 The Novelty Theatre was opened in 1913. On August 14, 1918 it was renamed American Theatre. On October 29, 1955 it was renamed Gay-Mark Theatre and was soon playing adult movies. By September 1956 it was operating as a burlesque theatre. In October 1956 triple-bill programs of feature movies followed and it was closed November 26, 1956.

An American Theatre in Evansville was mentioned in The Reel Journal of August 8, 1925. Though no address was given, the building in the photos linked above was certainly old enough to have been around in 1925, so it was probably the same American Theatre.

A fire broke out in the projection booth of the American in 1950, reported by Boxoffice of July 22. The only casualty was a print of Monogram’s “Lucky Losers.” As this was a Dead End Kids movie, the loss was negligible.

The July 9, 1955, Boxoffice said that new owners Harry Coleman and William Wunderlich, who had taken the American over from the Fine circuit (Premier Theatres) would spend $12,000 on remodeling the house. But the theater was nearing its end.

The American operated under the name Gay-Mark (or Gaymark- Boxoffice uses both forms) Theatre for the last year or so of its existence. The name change was announced in Boxoffice of October 29, 1955. In its September 15, 1956, issue, Boxoffice reported that the Gaymark Theatre had been converted into a burlesque house.

The burlesque policy apparently didn’t last long. In its December 29, 1956, issue Boxoffice said that the owners of the Gaymark had shuttered the house after a weekends-only, triple-feature policy had failed to pay off. That was probably the end of the American. I haven’t found the theater mentioned in Boxoffice after that under either name.

This page at Historic Evansville gives the American Theatre the AKA Novelty Theatre. According to the December 6, 1913, issue of The Moving Picture World, the Novelty Theatre had opened early that year.

Though designed primarily as a movie house, the Novelty boasted a small stage and four dressing rooms. In addition to a piano, the theater had a three-piece orchestra. The mirror screen was 13x17 feet, and movies were projected with two Simplex machines.

After the “adult” policy failed in October 1956, the place went back to third-run double features and closed for good on 11/26/56.