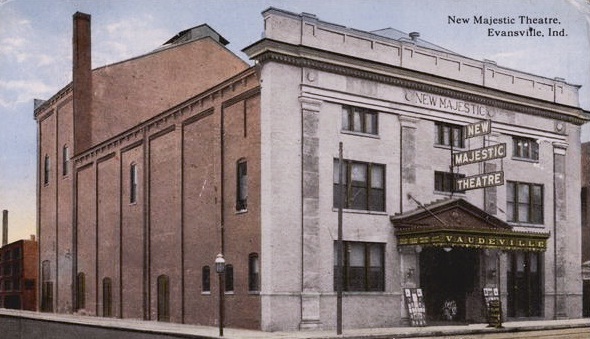 The Majestic Theatre was located just off Main Street on SE 5th Street a block from the larger Victory Theatre. I know that it was not in operation in the mid-1960’s and was demolished in 1974.

Any photos or info?

The Victory was once a Loews house, I believe it still operates under a different name.

An item in the July 31, 1915, issue of The Moving Picture World said that the Switlow Amusement Company of Louisville, Kentucky, had bought the New Majestic Theater in Evansville. The theater had apparently been operating as a legitimate house, as Switlow intended to convert the Majestic to a movie and vaudeville combination house. The architectural firm of Joseph & Joseph had been hired to design a $20,000 remodeling.

The May 17, 1919, issue of Electrical Review said that the New Majestic Theatre in Evansville was to undergo a remodeling that would cost between $50,000 and $75,000. The Evansville architectural firm Harry E. Boyle & Co. was providing the plans.

Carl Laemmle once rented the Majestic Theatre in Evansville, Indiana, “during the summer months” in 1908 “when it was closed as a vaudeville house (sic!).” Laemmle wanted to “bring talking pictures” to the American market and used a new machine called the Synchroscope from the German Inventor Jules Greenbaum at the Majestic in Summer 1908. It must have worked, because an old employee later wrote to Laemmle that “they played to packed houses all summer…” (John Drinkwater, The Life and Adventures of Carl Laemmle, p. 157-158)

On the site of the later Loew’s Majestic Theatre, a mill was built in 1856. The mill belonged to Igleheart Brothers, who moved to 1600-14 N First Ave, formerly 2214 First Ave, in Evansville in 1904. Then the former mill was “converted into the ‘Little Bijou Theater’”. In 1909, the Little Bijou Theater was “razed for (a) newer theater”. “A new larger theater is erected (in 1909, remark of the author) and called the New Majestic.” Quotes and information taken from: http://historicevansville.com/