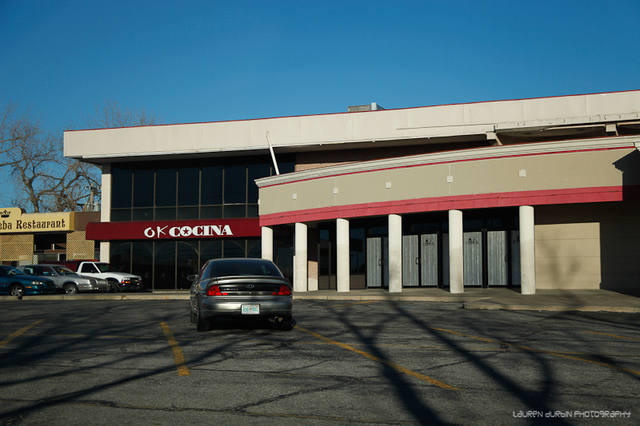 The MacArthur Park was a four-screen early "multiplex" before that term came into parlance. Located on MacArthur Boulevard at NW 23rd Street in Northwest Oklahoma City, across the street from the old Westwood Theater (now a church).

The MacArthur Park Cinema 4 opened on December 29, 1971. The theater showed first-run and low-budget first-run films. For example this is where I saw movies like “Legend of Boggy Creek”, “Phantom of the Paradise”, and “When A Stranger Calls”. I have no idea who the architect was but it was part of a strip mall. Its best years were the 1970’s and 1980’s and then it fell into rapid decline, closing on April 22, 1990. It reopened in April 1992 operated by MI theatres as a discount house, but closed on September 30, 1992.

Two screen were opened as a dance club and the other two screen reopened for movies and it was renamed MacArthur Park Twin Cinema and Dance Club from May 21, 1993, closing on June 10, 1993. The 2 Dance club auditoriums continued to be used as a night club.

In 2009, the building is a restaurant named OK Corral.

My recollection is that the MacArthur Park 4 was the first multi-plex in OKC. I saw my first R-rated film there: “200 Motels” starring Frank Zappa. I distinctly recall hearing the movie playing in the next auditorium through the walls.

The building was converted at some point in the early 1990s into a night club.

One correction to the description above: the Westwood Theater is not demolished, but is currently, and has been for many years, a church.

Thanks for the correction, Kevin. I must have missed 200 Motels but I’ll look for it in Netflix! —David Savage

This multiplex had the charm of a bus station. It had cement block walls, and this was the first OKC cinema not to have curtains over the screen. Instead of drapes, it flashed advertising slides during intermission. Seats were most uncomfortable, and there was always sound bleedover from other auditoriums.
I took a friend there once, and upon exiting the theatre he said (no matter what was showing) he never wanted to go there again. And he didn’t!

We played the trailer to “BOGGY CREEK” a G rated movie and a parent complained it was too scary!

Someone has the information wrong above. I saw Play Misty For Me there in January 1972.

In 1976, Heritage Theatres took on the MacArthur Park Cinema. The MacArthur Park 4 Cinema closed with two first run films (“Joe v. the Volcano” and “Love at Large”) and two dollar films (“Look Who’s Talking” and “The Little Mermaid”) on April 22, 1990.