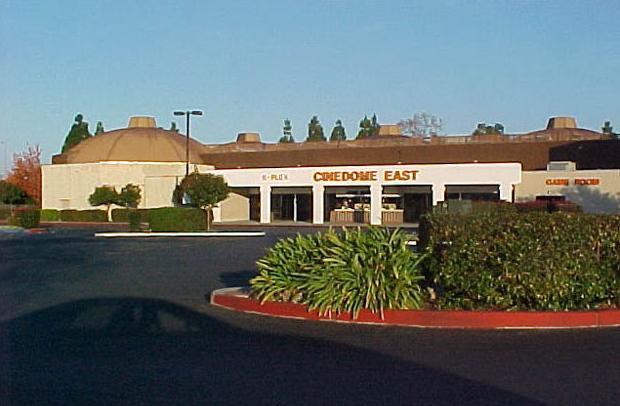 The Cinedome 7 opened on December 18, 1981 with 2,400 seats in 7-screens, and was the largest movie theatre to operate in Fremont. An eighth screen was later added.

Operated by Cinemark, it was closed on March 8, 2009, leaving Fremont without a first run movie theatre, although the Naz 8 has begun to run first & second run programs. It was demolished in late-2012.

This house opened early in 1982 as the Cinedome 7. Like the other Cinedome theaters in California, it was a project of Syufy Enterprises (Century Theatres), and was designed by architect Vincent G. Raney.

Boxoffice Magazine ran an article about it in their January, 1983, issue, mentioning that it had opened just a year earlier. In its original configuration, the Cinedome had 2400 seats, with four domed auditoriums of 400 seats each (two of them equipped for 70mm projection and six track sound) and three flat-top houses of 400, 200, and 200 seats.

The theater had been so successful from its opening day that Syufy was, at the time the article was published, building a second, identical cineplex a couple of miles away, which was to be called the Cinedome West, and is now the Cinedome 7 Newark.

I don’t know when the Fremont Cinedome got its eighth screen, or how it was done, or how it changed the total seating capacity. A few of the domed theaters at various Century locations were split in later years, but they might have split the larger of the flat-top theaters in Fremont. Somebody who has actually been there will probably turn up eventually to let us know.

An alternate name for this venue is CINEDOME EAST, to contrast with the CINEDOME WEST in nearby Newark.

Too bad it’s closing. This was a fun theater.

Status should be “closed”.

The 4th dome was split in half to make the eighth theatre. The domes at these locations were not as big as the free standing ones in San Jose, Sacramento and Pleasant Hill.

Joe Vogel, January 1983 article from Boxoffice is at

The last movie I saw at this theater was Hairspray and the dolby sound system went out and nobody seemed to care.

The theater still stands. Maybe they will make it into another Retro Dome, like the one in San Jose.

The theatre building was torn down in late 2012. There will be a health club taking its place.

This opened on December 18th, 1981. Grand opening ad in the photo section.