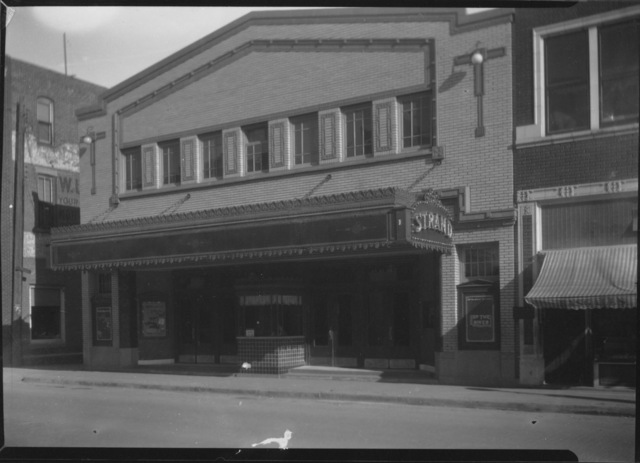 The Strand Theatre was opened May 15, 1917 with Marguerite Scott in “Snow White”. In 1926, its owner, M.G. Kirkman, opened another theatre, called the Muriel Theatre, across the street.

From September 1929 it was operated by Fox Midwest Amusement Corp. and the Strand Theatre is mentioned in the 1951 20th Century-Fox consent decree. The theatre was closed on April 11, 1950. It was reopened in 1953 and was closed on April 7 1963 with Philip Carey in “Black Gold”.

The building was converted to retail space, and was for a while the location of a Goodwill Store. As of March, 2009, it is vacant. By 2022 it was operating as a bar/special events place named The Strand

would love to go in there and see what is left of the theater itself….

There are five photos of the Strand Theatre at CinemaTour.

The Strand had a Reproduco organ.

As of right now, the building stands gutted. The only things left are the floor, and the original tin ceiling. No balcony or any other remnants of a theatre are left. The front windows and entrance were reconstructed a few years ago. It sits empty awaiting future development in downtown Hays.

The “Picture Theaters Projected” column in the December 30, 1916 issue of Moving Picture World had this item which must have been about the Strand: “HAYS, KAN. — Milliard Kirkman has plans by C. A. Smith, Salina, Kan., for a one-story moving picture theater, 50 by 80 feet.”

Millard G. Kirkman launched the Strand with Marguerite Clark in “Snow White” on May 15, 1917. The theatre featured a mirror screen and movies from Paramount, Bluebird and K.E.S.E. (Kleine-Edison-Selig-Essanay) Service at its launch. The Strand was acquired by Fox Midwest in September of 1929 from Kirkman which added sound to the Strand to remain viable. Fox Midwest later closed it on April 11, 1950 with “Dear Wife” and “Thelma Jordan” as it opened its new Fox Theatre the next day.

Fox retained the lease on the Strand keeping it dark until a 1951 consent decree forced the Strand out of its portfolio. The venue reopened with widescreen films in 1953/4 operating on a ten year agreement. It closed permanently on April 7, 1963 with “Black Gold.” The space was converted for retail purposes with the Village Shop taking its place two months later.