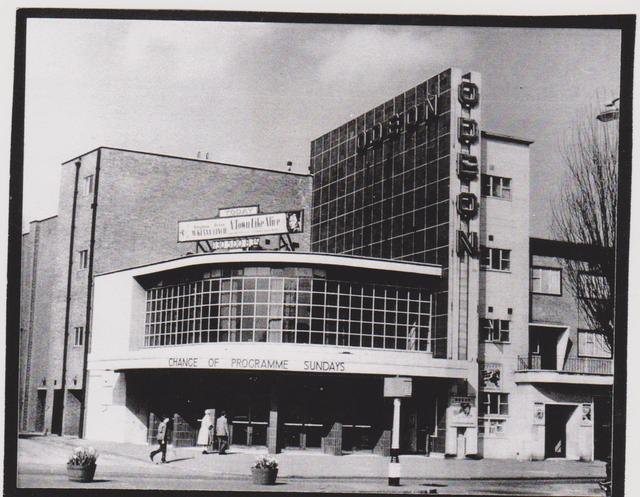 Originally plans had been proposed in November 1936, for a Savoy Cinema on this site, to be designed by architects Dixon & Braddock, but these were never carried out.

The site was aquired in July 1938 by Oscar Deutsch to build an Odeon for his Odeon Theatres Ltd. chain. Located at what was 46 Croydon Road, in the Elmers End district of Beckenham, now part of south-east Greater London, the Odeon Elmers End opened on 26th August 1939 with Louis Hayward in "The Man in the Iron Mask".

The Odeon was designed by Keith P. Roberts out of the Andrew Mather firm of architects. The exterior had a slab tower, with a curved entrance to its left, which had a series of seven windows allowing light into the circle foyer. There was a parade of shops with flats above on the right side of the tower. Inside the auditorium, seating was provided for 1.028 in the stalls and 490 in the circle. The splay walls each side of the proscenium had stylised grillework, and there were panels on the side walls a little further back, which had depictions of the signs of the Zodiac. The Odeon had two car parks located at its rear. It was the penultimate Odeon to open prior to the outbreak of World War II, the last to open being the Odeon Hendon.

The Odeon Elmers End led an uneventfull life and was an early closure by the Rank Organisation, closing after only just over 17 years of operation, on 5th January 1957 with Bud Abbott & Lou Costello in "Dance with Me Henry" and Jock Mahoney in "Overland Pacific".

The cinema was demolished and an office block was built on the site which is named Maunsell House. The Odeon Parade of shops and flats were retained.

A vintage photograph of the Odeon Elmers End, in April 1956, playing the Odeon Release:
View link