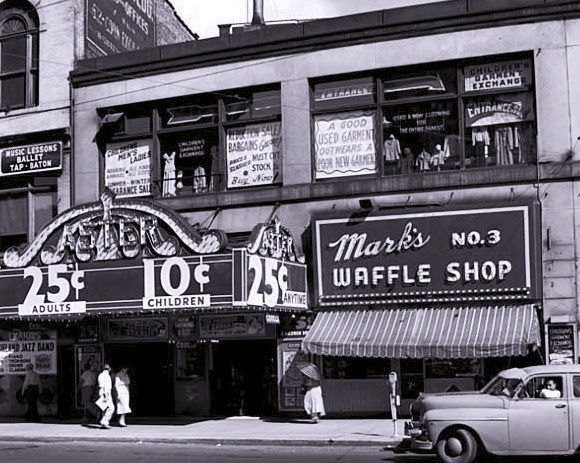 It was opened in 1916, and designed in Neo-Classcial style, with an auditorium that had murals on its side walls depicting scenes from the French countryside between sets of arches. A set of chandeliers hung from the ceiling, and it contained one of the largest pipe organs in Minneapolis, prior to the building of the large palaces a few years later.

In its early years, the Aster Theatre was the place to see the latest Charlie Chaplin comedy, being the exclusive Twin Cities theater to premiere Chaplin’s films.

By 1926 it was operated by the Finkelstein & Ruben chain. The Aster Theatre was wired for sound in 1929, later than most of its larger neighbors, but when it was, it was said to have some of the best acoustics in Minneapolis. Around the same time, it was modernized, and received a new marquee, lit up with hundreds of light bulbs, as well as new carpeting and projection equipment.

In order to keep up with the ever-larger and more extravagant movie palaces up and down Hennepin Avenue, starting in the mid-1930s, the Aster Theatre featured many gimmicks to draw in patrons, including a double bill of “Frankenstein” and “Dracula” in 1938. The Aster’s management offered $25 to any young woman who could sit all the way through both movies.

Here is a 1929 exterior photo of the Aster:
http://tinyurl.com/mf3dm

Thanks Ken MC for the photos of the theatre. The Aster looked like it was once a nice comfortable theatre.

Does anyone know where this theater was? Address?

The Aster was on Hennepin Ave. It was on the same side as the State Theatre, but between 6th and 7th street, closer to 6th.

Thanks Dick. Boy how the city has changed. I wish I could find a photo of the Mann downtown, with pictures of the sneak preview held there (before the roadshow release) for The Sound of Music, but this web site doesn’t even have a page for the downtown Mann, or do they under an older name? I only see the Mann Southtown.

Try looking up the Mann as the Pantages (Original and current name). It is listed.

Nice old pictures,they do not make them like that anymore.

The Boxoffice article Tinseltoes linked to credits the firm of Liebenberg & Kaplan with the design for the 1960 remodeling of the Aster Theatre.

The Astor Theatre, aka Riviera, mentioned in the introduction for the Aster, is listed in the finding aid for the Liebenberg & Kaplan papers at the University of Minnesota. The firm worked on that house in 1930-31 and again in 1935. The Astor/Riviera does not appear to be listed at Cinema Treasures. Oddly, the finding aid does not mention the Aster.