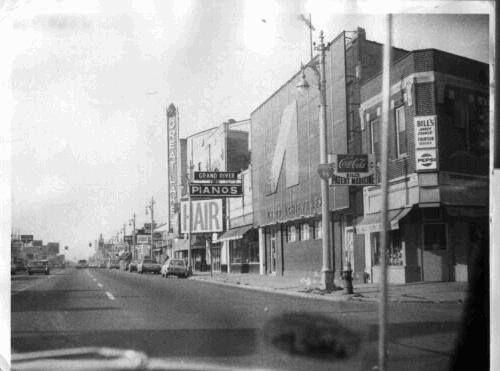 Opened November 23, 1927, the Great Lakes Theatre could seat 1,795, and was host to both live stage shows and movies in its first few years of operation, though it was operated as a movie house for the majority of its existence. It was designed by architect George DeWitt Mason, who was responsible for the Gem Theatre and Oriole Theatre in Detroit as well.

After it closed as a movie house in the late-1960’s, it became home to the Vest Pocket theater company from 1969 to 1972. Afterwards, it was used for a number of years as a church.

The theatre then stood for a long time vacant, vandalized and falling apart, making quite an eye-catching ruin along Grand River Avenue, especially its rusty, semi-intact blade marquee. It spelled out the words "EAT LAKES".

The Great Lakes Theatre was torn down in 1999.

Opened with “Pathe news”, 3 acts of vadeville, and a movie, “the Life of Riley”.

Is there anything on tnis site now?