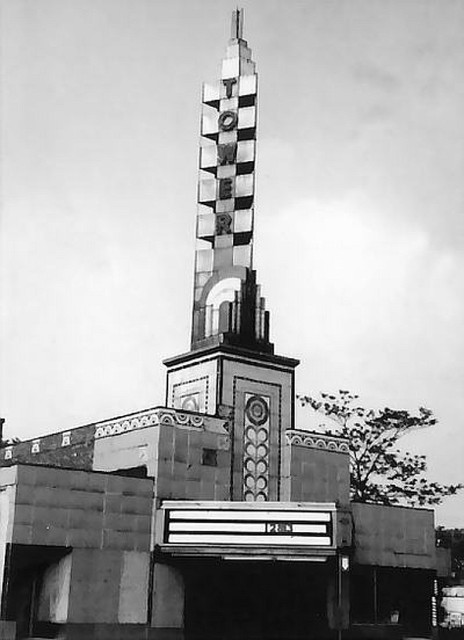 This mid-sized Art Deco-style neighborhood movie house could seat over 1,440. It was designed by Arthur K. Hyde, his only Detroit-area commission, and opened in 1935.

The Tower Theatre closed in early-1969, and was converted into a recording studio. It was demolished in the late-1970’s.

A three-page article about Detroit’s Tower Theatre appeared in the June 1, 1935, issue of Motion Picture Herald. A scan is available from The Internet Archive.

I just want to be sure you know that the old Tower Theatre, on Grand River Avenue in Detroit remained open well beyond 1964.

My family moved into the neighborhood on March 22, 1969; the theatre had only recently been shuttered…the marquee was still emblazoned: “Hang ‘em High….starring Clint Eastwood”.

By 1971, the defunct Tower Theatre had become home to the Holland-Dozier-Holland recording studios. Many times, while standing across the street (Fullerton & Sorrento), I watched several prominent musicians walk in and out of the building.

PS….the adorning Pewabic tiling reminds me very much of my beloved Mackenzie High School, which was only a few miles from the Tower.