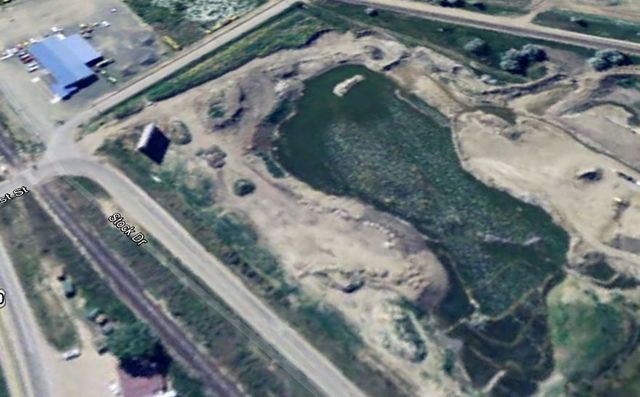 The Sunset Drive-In opened on August 6, 1954 with Philip Carey in “The Outlaw Stallion” & Walt Disney’s “Nature’s Half Acre”. It was operated by Shumour Theatres with a car capacity listed at 289. Mr. Stan Dewsnup bought the theatre in the 1960’s and it closed in 1976.

It reopened in 1980 as the Motor Vu Drive-In and then in 2007 the property was sold. In 2007 the drive-in burned down and the gravel pit company that owned the property simply expanded their facilities.

A couple of photos of the screen tower can be found at the following website:

Despite its simplistic architecture, its rough and rustic appearance is amazing! It’s a shame that its no longer standing.

Above address does not map correctly, Use Stock Dr & 1st St.

When this drive-in closed it was known as the Romantic Motor Vu Drive-In.

One of the relatively few demolished drive-ins where the only thing remaining is the screen itself.

Is it known how the fire started?

There’s a magnificent article by Mark Wolfe in the Winter 2007 issue of Colorado Heritage, which included most of the details of the Sunset’s life. The article, “Silver Screens Under Starry Skies,” is hard to find (cough Google), but here are the high points:

Schumour Theaters, Inc., built the Sunset and chose its name from submitted contest entries. The 280-car drive-in was scheduled to open on Aug. 5, 1954, but heavy rains turned the as-yet ungraveled ramps to mud, so the actual grand opening was the following night. The first double feature was “The Outlaw Stallion” and “Nature’s Half Acre”.

At the time of the article, “Stan Dewsnup, whose family owns the Big Sky and Tru-Vu drive-ins in Delta and indoor theaters in Delta, Rifle, and Craig, now owns the Sunset, which has been closed since 1976.”

From the Steamboat Pilot of Steamboat Springs CO, Aug. 2, 1979: “‘The Warriors,’ a movie with an anti-gang theme, (really?) apparently didn’t make its point with Craig viewers. The Moffat County Sheriff’s Office received a call to make a drive through at the Monday night (July 30) showing of the film after the Motor Vu Drive-In employees reported the viewers were becoming hostile, according to a sheriff’s office report.”

An ad in the June 16, 1988 Steamboat Pilot of Steamboat Springs CO said that the “Craig Motor View Drive-In Theatre Opens for season Friday, June 17th”. It continued to advertise, starting late every year, through September 1990.