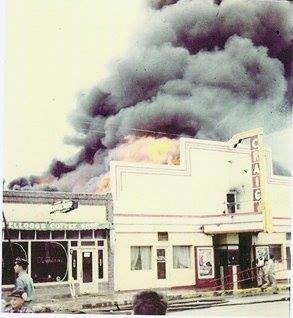 Motion Picture Herald, May 17, 1947: “The Craig, Craig, Colo., closed for remodeling, owned by Gibralter Enterprises, burned to the ground.”

The (Grand Junction CO) Daily Sentinel, Nov. 5, 1947: “Craig – Construction of the new Craig theatre was started recently on the site of the old theatre which was destroyed by fire May 9. Cost of the building is estimated at $120,000. Plans include two stores flanking the theatre lobby and entrance; capacity will be 600. Schumour Theatres, Inc., which also owns the West theatre here, is building the Craig.”

The Jan. 1, 1925 issue of the Craig Courier ran an article titled “History of the Victory Theatre”. It called it “the only theatre and movie house in the county,” seating 450, run by Chapman and Evans, who bought it in December 1921 from Ora Card.

Card opened the theater “in the old building near the D. & O. Lumber yard, now used as a warehouse. The Evans Block, on Victory Way, was built about that time, and the theatre occupied a large part of its ground floor space. The new management called their place of amusement the "Gem” and by this name it was known until last summer when it was re-christened, the "Victory” theatre.”

Chapman and Evans planned improvements to start in Spring 1925 including “the installing of a slanting floor, the rearrangement of the lower floor and the building of an upper story which will be used for office rooms, the construction of a modern stage and dressing rooms,” and a high ceiling above the stage for hanging scenery.

The Dec. 12, 1934 issue of the Craig Empire Courier announced the reopening of the Victory after a weekend closure to install a new sound system and other improvements. “The side and rear walls (of the main auditorium) have been paneled and attractive scenes painted at intervals.” Owner Alma Evans also installed an electrically-controlled curtain.