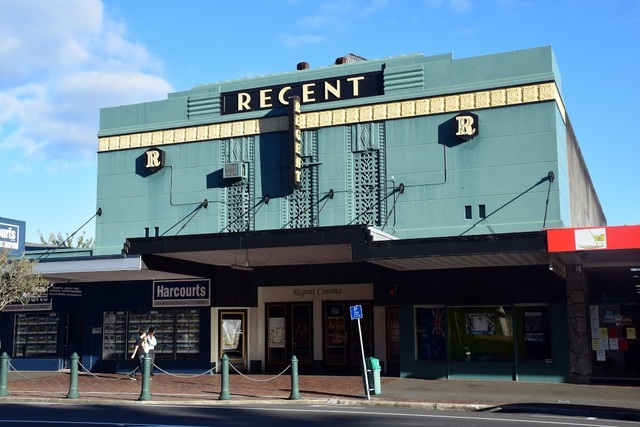 Taumarunui was an isolated town in the centre of New Zealand (Population 6,000) with no major cinema within 200 miles in any direction. As a consequence it always received first-run product because no one outside the town every knew what was screening and the film distributors could use prints waiting for city engagements without fear of upsetting the major chains. The Regent Theatre was opened in 1935 by the Imperial Picture Co. Ltd., and had a seating capacity for 707.

Because of the isolation, it was not economic to spend a lot of money bringing TV, colour, multi-channels to this remote town. It was one of the best independents in the country and never fell into the hands of the majors during the grab of every location they could acquire. There were two cinemas in town, the Kings Theatre and the Regent Theatre, both built by the Simmons Family who owned and operated them until they sold to Russell Cave in the late-1960’s.

Both cinemas had stadium seating at rear and sloping floors at front. They were in adjacent streets and films could be carried across a rear car-park between the two site. The Kings Theatre closed when TV arrived and still stands as the County Council Office.

I owned the Regent Theatre from 1973 until 1981 then I sold to Allan Webb who developed a group of Waikato Cinemas including Taumarunui, Te Kuiti & Te Awamutu. Late-1970’s I installed the first full cinema automation in NZ using a Bauer U5 and GUVT automation. The Projectionist Union came down to inspect and tried to get the film distributors to "stop supply". The Regent Theatre was closed around 1990.

It was reopened in 1994 by the present owner/operators Erl & Noeline Riches. Sell out crowds attended to see the New Zealand made film “Once Were Warriors” starring Rena Owen. The Regent Theatre is now able to screen digital features and the picture and sound are constantly being upgraded.

As you can see from the posters in the windows – the Regent is back in business: http://www.taumarunuicinema.co.nz/

Came across this Website the other day and link to the Regent and Kings Theatres in Taumarunui bought back a lot of memories. I am the grandson of Roy Simmons, the original Managing Director of the Imperial Picture Company. At his death my father Percy moved his family back from Auckland to Taumarunui and took over the running of this business. As a 11 or 12 year old my role was taking the rolls of film between the two theatres and the saling of ice creams at half time. Fond memories of those times. I still have programmes from the time sound movies were introduced into the area. My grandfather also operated a mobile theatre taking movies to the smaller towns like Ohura and Ongarue during those early years. Well done with your Wesite