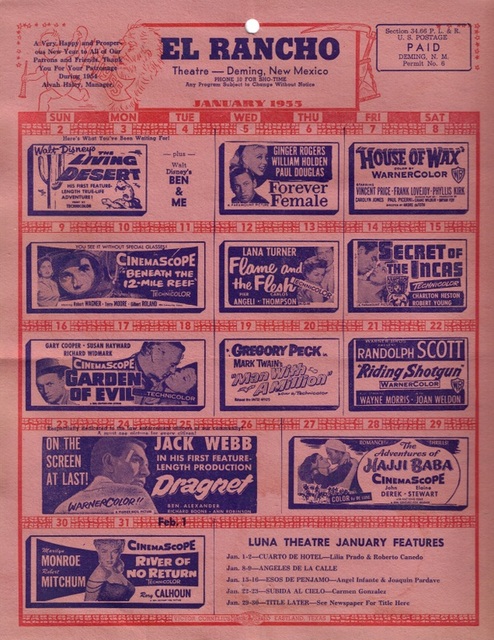 Opened February 18, 1942 as the El Rancho Theatre, it was still operating with this name until closing in Summer of 1979. It was refurbished and reopened as the Sunn Theatre on October 5, 1979. It was closed on April 30, 1983 and now Heavens Beauty Salon operates in the building.

A drawing of this theater appeared in Boxoffice, June 21, 1941. Though it was to be called the El Rancho Theatre, it was unmistakably the same building seen in the 1982 photo. The modern/pueblo style design was by architect Jack Corgan, Corgan & Moore, Dallas.

The correct address for the Sunn Cinema is 113 E. Pine Street, which is currently the address of Heaven’s Beauty Salon. There’s been some confusion of theaters in Deming. The listing for the Cinema 3 gives it the aka El Rancho for that house, but that aka properly belongs to the Sunn.

I can’t find any Boxoffice items about a Deming Theatre, but there are plenty of references to the El Rancho, from the early 1940s until the late 1970s. The historic El Rancho photos and rendering I’ll link to below depict the same building in the Sunn Theatre photo of 1982. It did not open as the Deming Theatre.

The El Rancho was featured in this Boxoffice article of November 2, 1942, which also featured two of Jack Corgan’s other recent theater projects. The previous year, a rendering of the proposed El Rancho was included in the Just Off the Boards feature of Boxoffice’s June 21 issue.

Numerous comments about the El Rancho are currently found on the Cinema Treasures page for the Cinema 3, which was identified there as having been located in the former El Rancho building. This was apparently an error, as CT user Mr50s said that Cinema 3 had been located in a former Pepsi-Cola bottling plant. That plant was at the corner of Pine and Copper streets, about a block and half west of the Sunn/El Rancho.

Update: Went by this Theatre structure in January of 2012. Still looks pretty much the same..

Here are updated links to the Boxoffice items cited in my previous comment.

Rendering of the proposed El Rancho Theatre (bottom of page) in Boxoffice of June 21, 1941.

The February 13, 1942, issue of The Deming Headlight said that the El Rancho Theatre would open on February 18. The movie for the opening would be Skylark with Claudette Colbert.

The beauty salon has removed the separate box office/ticket booth so the building looks kinda mundane now. I’m not sure what they do w/ the back of the building….

The Sunn Cinema is heavily featured in the film Gas Food Lodging (1991). Fairuza Balk’s character repeatedly attends matinee’s there and even goes into the projection booth. If I find a good still, I’ll add it to the photo section.

The El Rancho closed for the summer in 1979. It was refurbished becoming the Sunn Cinema on October 5, 1979. The Sunn set closing April 30, 1983. It became a youth center and boxing club before being retrofitted for other retail purposes.