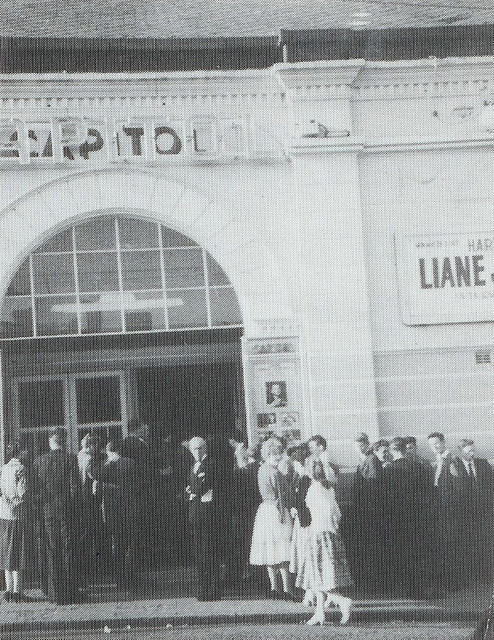 The Capitol Cinema was formerly a live theatre, then a market, before it was converted into a cinema in 1939. It was the first run cinema of the town. It was closed as a cinema in the Summer of 1969 and became a bingo club, but this was not successful and was closed in July 1970. It was an empty building when the Rank Organisation took over the Jackson Withers circuit in 1977, but the Capitol Cinema was never re-opened.

I was Chief here in the early sixties. At that time there was certainly a center aisle downstairs and operating “tabs” as well. We showed films on two by three day basis and worked BINGOon Sunday nights

Hi Mick, great to read your comments on this cinema. I can’t remember the centre aisle in the stalls at all, am sure you will have known there was one. Do you remember seating capacity anf final film screened? Was it a Withers cinema when you were there as Chief and was it operated seperate to the Maxime?

There is a photo on the “flicker ” site that clearly shows a centre aisle! Yes it was run by the Jackson Withers group, in fact I was interviewed for the job by Dia John at the Plaza Cardiff. Again yes it was run as a sort of second cinema to the “Max” which of course was the Number one cinema of the two, showing the second run films while we were left to show the rest, I have awful memories of spooling up films in incredibly poor condition!!! U wasn,t there long and left to take up employment as a trainee manager at the Olympia in Cardiff

Iâ€™m sorry that I overlooked your comments above.

My memories of the venue are as a patron and during an exterior visit after closure. The cinema must have had a central aisle when I used to go there to see movies, the one I remember being one of the last movies I saw there was Disneyâ€™s Jungle Book {it was a double bill although I cant recall the supporting feature}. The last movie I recall being advertised on the external poster displays included Taffy and the Jungle Hunters, which would have been a support feature.

During the visit following closure the screen had already been torn with some seating removed. Perhaps the central aisle had been removed for bingo?

The ticket and concessions booths still had stacks of both cinema admission tickets as well as bingo books.

Under the stage there was an enormous amount of old cinema posters and stills.

During my main cinema going days as a teen the Maxime was by then the primary cinema and probably the best from a cinemagoers point of view back then.

I can well imagine that the cinema was a very different experience when working there than visiting as a patron.

Yes indeed, my memories of this cinema are of fifty years ago, but still very clear. We were indeed second poor cousin to the Maxine. so much so that I used to beg things like leaders, film cement, blooping ink from my ex Chief, Frank Saunders in the Olympia in Cardiff, enabling myself and Fred the second to put on as best a performance as we could.

Thanks Mick… I enjoy reading your memories. Why did you have to borrow from the Cardiff Olympia rather than the Maxime or even the Olympia in Tredegar or other nearby JW circuit cinemas?

The Maxime was a more modern cinema compared to the Capitol.

How did you get on with your training as a Manager at the Olympia in Cardiff and dis you remain with the ABC circuit following completion of your training?

Quite a history to be told there! My e-mail is send yours if you wish.

It is interesting to note that Mickrick had to beg materials from another cinema. The normal method of getting supplies for Withers cinemas was by requisition through the management.Requisitions had to be made two weeks in advance and were delivered in boxes which contained projection materials, carbon rods and light bulbs.

Both the officially Withers supplied blooping ink and film cement were of very poor quality. I think the Withers head office must have bought the substances in bulk containers and decanted them into smaller glass bottles for distribution to their halls.Thus the film cement was usually contaminated by air and of a poor strength when it reached the halls.

Many of the chiefs did not bother to requisition Withers supplied film cement because of the risks of the splices failing when they passed through the heads. What they did instead was to buy commercial one pint containers of neat acetone (which made much stronger joints) from the local chemists and Lion Brand Indian ink from the local stationers which proved to be a more scratch resistant blooping medium.Needless to say these expenses were met from the chiefs own pockets and not by the management.

The cash outlay was later recovered by surreptitiously selling off, to scrap dealers, the copper drippings from the carbon rods.The chiefs with Peerless arcs , which had drip trays, usually obtained more rescued copper than those who operated Kalee arcs.

Film splicers were also a bone of contention. The standard splicers were Premium machines but there were two differing types. One was a cheaper and simpler match and splice machine which did not contain a cutting blade.Hair dressing scissors or nails scissors were used to make the cut.These being much sharper than ordinary scissors.

Withers boxes that were equipped with the smaller model often begged for the more advanced model but never got one.In many cases the chiefs again funded the purchase of the better model out of their own pockets.The standard chief’s wage in 1960 being about 12 pounds per week plus extra for Saturday matinees.When I took up jobbing projecting I purchased a Premier Two splicer which which was, for me two weeks wages, a lot of money in 1960.

Outside of the circuit hall many of the welfare hall jobbing projectionists did splices on an eyesight basis only aided with a pair of scissors. They often used an England’s Glory or Pioneer matchbox, guided by a thumb, to scrape off the emulsion.Pressure was supplied by a sheet of waxed paper placed against the joint and a wad of newspaper placed on top.The waxed paper being either common sandwich grease proof paper or ordinary paper which had a candle rubbed over it.

Well Edith, I can assure You that ordering and getting were two different things. Whilst I was at this venue we were lucky to get carbons never mind other items. We had no manaber other than a chap in a van who occasionally called in with publicity etc. In all my experience I NEVER heard of a chief buying His own equioment, the wages were just too damned low. Copper drippings? usually used for tea, sugar and milk or sometimes as a treat, Fish and Chips from yhe chippie across the road! The method of splicing described I have never witnessed or heard of. matchboxes being used, the very thought of sand particles on the rewind bench frightens me even now, we Always used a safetyb razor blade and used eyeline sighting even on 70mm film. which of course we were paranoid about contaminatinf film surface with any thing, certainly I would not have allowed marchboxes in the projection rooms.

Many of the practices that would never ever be found in the up market Withers circuit were quite common in the minor welfare halls of the valleys.Many of these halls were operated by a single projectionist who was often a part time jobber who lacked the finer side of projecting.

Extra payments to jobbers were usually made for spooling up and linking up the various advertising shorts into one reel.Working on a Sunday attracted double pay with the added bonus that most valley halls had by law to close their screens by 2130 hours on those days.

Not exactly big money now but acceptable at that time. Many of the halls I worked in often fiddled the books and paid me in cash in hand at the end of a session. Apparently it was easier to pay illicit cash than to do the paperwork for a one session only employee.It also avoided the employer making a National Insurance contribution. I later learned that that these back hander payments were usually sourced from the Kia Ora or Popcorn revenues.

In 1959 the average gross salary for a chief in the Withers circuit was twelve pounds a week.The flag hall chiefs received slightly more.In many cases chiefs would not take their one statutory day off a week entitlement so that their wages could be boosted to a higher level.

I bought my own Premier Two splicer soon after I started projecting in early 1960. I could just not get on with the smaller Premier One splicers which did not include a preset cutting blade on the lower right hand clamp side. I also purchased my own can of acetate, bottles of Lion Indian ink plus a supply of pink Windolene which I took with me to every hall I worked in.If my memory serves me right my first half pint can of acetate lasted me for two years.

Also I always carried a set of glass slides pre coated with shoe cream and a nail with which to scratch messages on for the slide lanterns.Most of the messages projected were usually asking people to move cars which were blocking drives or exits from the hall car park.

Many of the third tier halls had projectors that were in a deplorable condition. Arcs were rarely cleaned and mirrors horrendously spattered. Kalee heads had their gearing house in an oil bath that circulated when the machines ran.Quite often the machines were filled up with oil on their installation and then left. There was a glass bubble at the top of the heads through which you could see the oil circulating.As long as the oil could be seen flowing, no one ever considered that an annual oil change might be a good idea.Thus eventually the oil baths would become ineffective and the gearing would grind itself away.These head failures did not worry some of the smaller circuits as there was always a supply of second hand heads available from the many halls that were closing at that time. For example a supply of spare parts for the Cardiff Globe cinema came from the nearby Canton Coliseum which had gone over to bingo.Likewise replacement heads for the Cardiff Ninian had formerly seen service at the Tivoli and then afterwards placed into the Withers spare part store.

I entered into projecting long after the use of nitrate film had been discontinued throughout the cinema industry.Thus by 1960 the risk of fire in boxes was less of a risk than it had been in the past but still existed.Even so it was not unusual to cover for a projectionist’s night off in a minor hall and find an ash tray filled with cigarette ends somewhere in the box.

Minor hall projectionists often spent long hours alone in a box waiting for the main feature change overs which were about twenty minutes apart. On one occasion I can recall being employed at a hall in South Wales, as a sole relief, for a whole week. The projectionist gave me a run through of the system and then escorted me to a wide balcony outside of the box. The balcony contained a large number of rabbit hutches which evidently provided the projectionist with some extra income.Apart from operating the box it was made clear that I was also expected to feed and clean out the rabbits.