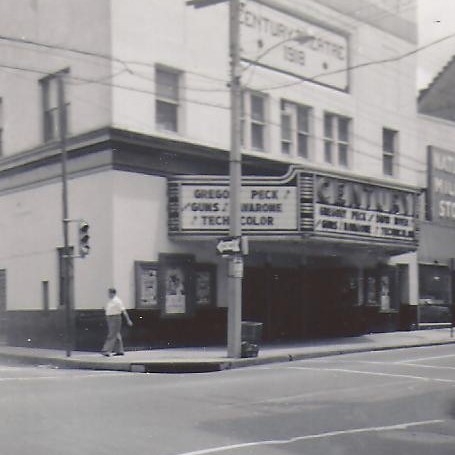 The Century Theatre operated from 1918 and closed on November 1, 1970. The building was demolished for a parking lot.

i came across a picture of the century while re searching buildings in petersburg at library of virginia.
in picture on front of the century theater is the year 1918
it shows the street,and even a traffic patrolman standing at his booth.
possibility that it was built 1918
i have a copy of the picture to submit.
thanks

The Century closed in the fall of 1970. Its last picture was “Good Morning and Goodbye”.

My wife wanted to comment that this is where she saw The Sound of Music in 1965. Her father was stationed at Ft. Lee. Her grandmother came from Tennessee to visit and they took her to see the movie. She remembers choking on a Milk Dud and afraid to make a sound (little ones were taught to be quiet in the theater in those days)! She was 8 years old and attending Bollingbrook Day School. While her father was in VietNam for his first tour, she moved to Woodmere Apartments. The Walnut Hill Shopping Center was under construction and a movie theater was built across the road. She says she spent some Sat afternoons in the matinee and they would stay all afternoon; no one told them to leave. On Google Maps, it looks as if the building that housed the theater is still there but the shopping center is pretty dead. She remembers the movie playing at the “new” theater was “Alfie”…her mother told her that she couldn’t see it as it was for adults only.

The new theatre was the Walnut Mall, which was built to replace the aging Century, but the Century soldiered on for about three more years and closed because they were afraid the roof would cave in if there was a heavy snow. The Walnut Mall Theatre was later twinned. Then after it closed, it became a church, which it is to this day.

An article in the September 20, 1964, issue of the Petersburg Progress-Index said that the Century Theatre Company was chartered in 1917, so the theater must have been opened by 1918. In its early years the Century featured Keith vaudeville.

The October 6, 1917, issue of The American Contractor had this item:

Richmond architect C. K. Bryant had a long career, but the Petersburg firm Craig & Isbell, apparently his associates on this project, I have not found mentioned in the trade journals after 1918.