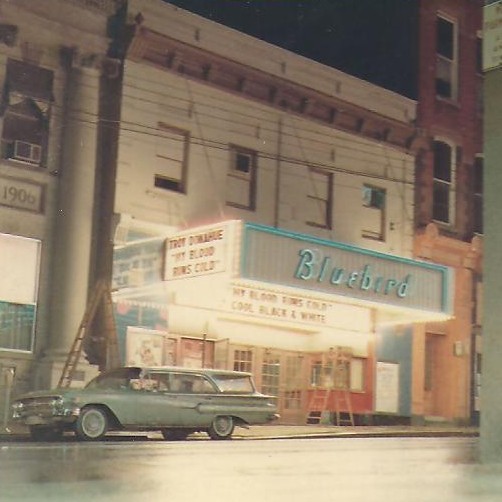 The Lyric Theatre was opened in 1908. Around 1918 it became the Bluebird Theatre. It later became the Palace Theatre and a Wurlitzer organ was installed in 1922, replacing an earlier BarckHoff organ installation.

It has been rebuilt as office space,it appears,although not much use yet.It suffered the same total neglect as the Venus in Manchester area of Richmond.

My grandmother was the manager at the Bluebird during the 70’s and early 80’s. She was also married for a while to the projectionist who worked there. I remember seeing Piranha there and a few spaghetti westerns among others since I was able to get in free. They mostly showed exploitation films, B movies and a lot of black exploitation films during the 70’s (Shaft, Superfly, Blackula etc.) The clientele at that time were largely students from VSU. They may have shown XXX films during the 80’s but I can’t remember since my grandmother left and went to the Walnut Mall theater. It has since been restored but not into a cinema to my knowlege.

This theater was also renovated in the late sixties by Neighborhood theaters about the same time they renovated the National in downtown Richmond and re-named it the Towne. The renovated Blue Bird often got first run fare that played in Richmond at the same time in roadshow (i.e. 2001, SOUND OF MUSIC,etc.) It was a tiny theater. Among the many movies I saw there: THE MUSIC LOVERS, HELLO DOLLY, PAINT YOUR WAGON, LAWRENCE OF ARABIA, PATTON, FIVE EASY PIECES, JOHN AND MARY, OWL AND THE PUSSYCAT, and TORA TORA TORA.

Here are some lines from a June 19, 1968, Petersburg Progress-Index article tracing the history of the Bluebird Theatre name:

The name Bluebird had returned to its original location in 1959. That year, the September 9 issue of the paper said that the Palace Theatre would close for remodeling on September 16. The Rex Theatre, which had been closed for about a year and was being refurbished, would reopen on September 17. When the Palace reopened it would replace the Bluebird Theatre, which had closed on Labor Day and was being converted into a shoe store.

The Lyric Theatre was actually opened before 1910, and was mentioned in the September 8, 1908, issue of The Billboard, which said that the coming season in Petersburg promised to be bright, with the opening of the “…Majestic, Virginia and Lyric moving picture and vaudeville houses….” It added that contracts had been let for two more vaudeville and picture houses, and improvements had been made to the Academy of Music, the town’s legitimate house.

The September 20, 1964, issue of the Progress-Index noted that there was also a Palace Theatre in operation at Petersburg before the once-and-future Bluebird took that name. It was located on the east side of Sycamore Street a few doors below Franklin. The article did not mention its years of operation.