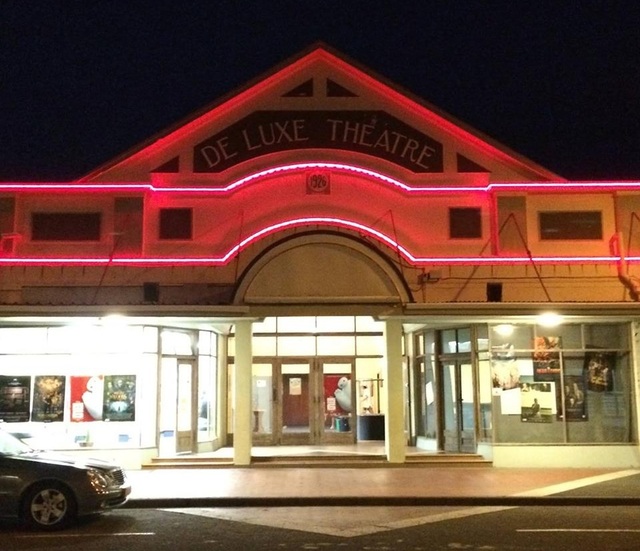 Located in the Regent Buildings, the Regent Theatre is listed in the 1951-1952 edition of Film Weekly Motion Picture Directory as being operated by Kerridge-Odeon Theatres. The theatre is built to the rear of a two storey building with walk-through access. The proscenium arch is still intact but generally the building is in a deteriorated state. Many original features survive throughout.

It is thought the Regent Theatre opened in 1926 and closed in 1961. In later years it was re-named De Luxe Theatre and was the De Luxe Cinema in 2003. Also it is thought to be designed by Harry Leslie Daniel West of Whincup West architects. The building is registered with the New Zealand Historic Places Trust (Listed Category II)

I would love to restore or renovate. Any further details on the building or architects would be appreciated.

A close-up of the De Luxe Theatre, photographed in March 2009:
View link

The Deluxe Theatre Opotiki was originally built for the Shalfoon Brothers in 1926 and was used for Films and live shows for many years.Around 1928 Kerridge leased the theatre (The third in his chain)and ran it until he eventually he perched it around 1940. Kerridge changed the name to The Regent and it stayed in his chain of cinemas until around 1976.In 1960 a Fire burnt out the stage and auditorium Kerridge-Odeon rebuilt the the cinema but not the stage.In 1976 it was sold to Brian Amsley Two years latter the Regent was Purchased by the Opotiki Community Theatre Trust who still run it today The Name was changed back to the Deluxe,and the Entrance has been restored to its original Art Deco style and the stage has been reinstated many more renovations have been carried out, including a small 40 seat theatre to the north side. The main theatre still seats over 500 people and is used regular. Films are shown in the small theatre most weekends and a silent film festival is held each September in conjugation with a silent film-making competition