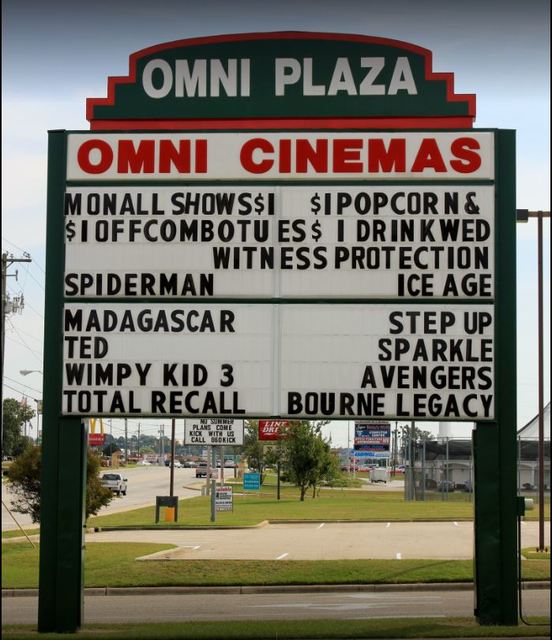 Later owned and operated by Charlotte based Consolidated Theatres, it was acquired in 2001 by Regal Cinemas, and by 2010 was bought out by independent chain Omni Cinemas after Regal Cinemas sold it. It is the only eight screen discount cinema that serves the surrounding areas of Cumberland County and Greater Fayetteville.

This theater is showing 2nd run films at discount prices

that is not a bad deal, if they keep the theatre up,wonder if it is dark now.

This theater was operating in 1996 as Regal Cinemas Omni 8. Consolidated left Fayetteville in 1989 after their sellout to Carmike; if they had built a new theater in Fayetteville in 1998 it would have been a stadium design. Judging from the marquee could this have originally been a Litchfield Theatre?

I just saw the photo of the Omni Cinemas 8. This doesn’t look like an old Litchfield, it looks like an old Food Lion.

This and the Cameo Theatre downtown are the only operating theatres within Fayetteville’s city limits that Carmike doesn’t run.

I have in my possession the original newspaper ad from July 3,1990 if anyone is interested in the grand opening of the Omni Cinemas 8. Contact me at this address: Thank you.

Fairlane-Litchfield Corporation operated several theatres within North Carolina,South Carolina,Georgia, and several Southeastern states. This was one of those theatres acquired. Fairlane-Litchfield sold most of their screens to United Artists in the mid-to-late 1980’s with the exception of the ones they kept and later sold to other chains(The Omni Cinemas 8 was sold off to Consolidated Theatres by the late-1980’s). Their corporate management began operating and rebuilding their organization and a new company called Litchfield Theatres LTD by going into markets they had not been in by opening newer and flashier multiplexes in Tennessee( in the metro areas of Nashville,Memphis and Knoxville),the greater Atlanta area, greater Savannah area and other parts of Georgia,Florida and a few other locations including Alabama,and Southeastern Virginia.

In North Carolina,Fairlane-Litchfield operated several theatres throughout the state which some were bought out by United Artists around 1988 and 1989. Originally located with their headquarters in Easley,SC….the main man was Foster McKissack was president of the Litchfield Organization while Ulmer Eady was head of operations…..The operation later on moved to Litchfield’s resort on the South Carolina coast and renamed it “Litchfield By The Sea”.

After the sudden death of President McKissack,all of Litchfield’s screens were bought out by Regal Cinemas who also later on bought out United Artists.

The Omni Cinemas 8 was the only Fairlane-Litchfield theatre chain in Fayetteville and the first in the Cumberland County and surrounding markets before it was taken over by Consolidated Theatres and later by Regal Cinemas before it was later sold to an independent chain.

The Omni 8 Cinema closed temporarily for a refresh on September 3, 2019 relaunching in November of 2019. It closed March 23, 2020 during the COVID-19 pandemic. On June 26, 2020, it decided to add a temporary drive-in screen in its parking lot accommodating 250 cars while it waited for the ability to reopen.