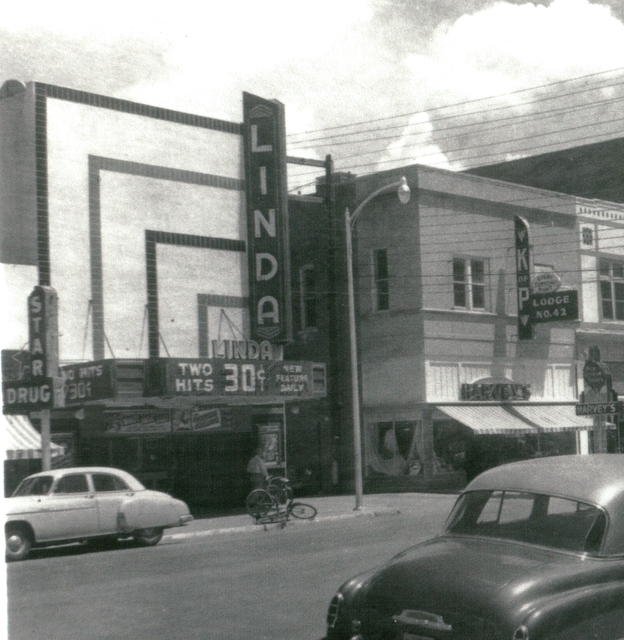 Phil Isley opened the Bobby Walker Theater on February 6, 1941 and named it in honor of his eight year old grandson. It was created from a J.C Penney store. In 1946, he sold the theater to Thomas Griffing, who also owned the Texas Theater in Abilene. Griffing then changed the name to Linda Theater in honor of his niece.

The Linda Theater was closed in January 1958 and demolished in September 1960.

The February 8, 1941, issue of Boxoffice Magazine said that Phil Isley had opened the Bobby Walker Theatre on February 6.

151 Pine Street was the location of this theater which once housed the original Abilene home to J.C. Penney’s. The Phil Isley Circuit of Dallas launched Feb. 6, 1941 Grand Opening of the Bobby Walker Theatre in Abeline with “Maryland.” Nine month old Bobby Walker, Phil Isley’s grandson and son to actors Jennifer Jones and Robert Walker, was on hand to inspect the building — a 25' by 140' structure with seating reduced from 800 theater goers in the original plans to 700 patrons when fashionable-of-that-era love seats were installed.

In September of 1946, Tom Griffing of Griffing Enterprises and later the Video Independent Theatre Circuit would purchase the theater from Isley. He renamed it after his only niece from Oklahoma changing the Bobby Walker to the Linda Theater. The theater launched with the exploitation film, “Mom and Dad.” The final owner, John J. King of King Theatres kept the Linda moniker launching October 15, 1954 with “The Woman is Dangerous” and “Wonder Horse: Black Eagle” and advertising as “two hits for two bits.” King shuttered the Linda in January of 1958 and then in September 1960, the Texan Hotel was being demolished. That project took with it a footprint’s worth of buildings at the corner. Excised in that group of buildings was Linda / former Bobby Walker. A parking area now sits where the theater once stood.