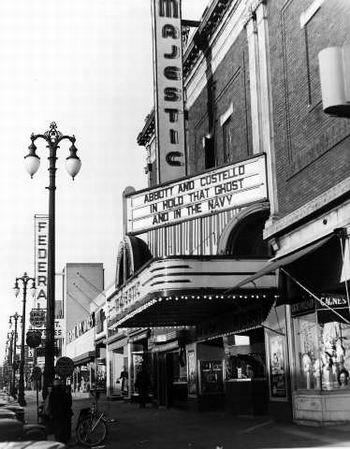 The Majestic Theatre was opened in February 1916, and continued until at least 1950. It was demolished in 1966 for a parking lot.

The Majestic was being taken over by the Associated Theatres circuit according to Boxoffice Magazine of July 30, 1938. The deal was not completed until 1939. The previous owner was named George Wilbur, who became a manager for Associated, first at the Rialto in Wyandotte, then at the Majestic after it was remodeled by the new owners.

The earliest mention of the Majestic I’ve found in Boxoffice is from 1937, but George Wilbur was mentioned as early as 1935 as being an operator from Wyandotte. Judging from the photo linked above I’d say the building must date from the 1920s or earlier, and the style of the facade suggests that it was built as a theater.

Wow, I have finally found the theatre from the short lived CBS tv show that took place entirely in the MAJESTIC theatre.Could this be the theatre that was in that show that only had a handful of episodes before it was given the ax? I am so glad i stumbled on that summer replacement shoe back in 86 or 87. I wonder if anyone even remembers the show. I did get to videotape a few shows before it was gone. This must not be the MAJESTIC, but i was hoping. And quite surprized i have not read anyone yet write of this very ture show. If you worked in radio you knew WKRP was on the money.If you ever lugged a film or two up to the booth you know THE POPCORN KID was written by a theatre person. A MOVIE THEATRE PERSON not a 20 plex cinema person.TOO large,can’t get to know your fellow employees.

The February 5, 1916, issue of The Moving Picture World ran an item about the opening of the Majestic Theatre:

“The new Majestic theater in Wyandotte, owned by the Caille & Guthard Interests of Detroit, was formally opened on Thursday evening, January 20, to immense crowds, hundreds going from Detroit to see the new house. In the first ten days booking the following companies have been considered: Paramount, Metro, Big Four, Equitable, World, Pathe, Triangle and Blue Bird. The opening picture was ‘The Whirl of Life’ with Mr. and Mrs. Vernon Castle, which Caille & Guthard control for Michigan. George P. Wilbur is the manager of the New Majestic, having come from the Grand in Columbia, Ohio. The Marx theater in Wyandotte closed Jan. 23. It will be entirely remodelled, redecorated and refurnished and re-opened sometime in February. This theater is also owned by Caille & Guthard. Mr. Guthard announces that the firm will also control a third theater In Wyandotte.”

Other sources indicate that the Marx Theatre was built in 1910 at the northwest corner of Biddle and Sycamore Streets, so it was almost directly across the street from the Majestic.

The February 19, 1916, issue of The Moving Picture World noted that the new Majestic Theatre in Wyandotte had been designed by Detroit architect Christian W. Brandt.

Shortly after the opening of the Majestic, trade publication The Billboard ran this item headed “Another Theater” which mentions other houses operated by Caille & Guthard as well as four other theaters then operating or soon to be operating in Wyandotte:

“Wyandotte. Mich., Jan. 28.—With the opening of the new Majestic Theater here this city of 12,000 people is fast becoming one of the greatest theatrical towns of its size in the country. The new Majestic, owned by the same firm controlling the Majestic, Fine Arts, Knickerbocker, Norwood, Grand River and other Detroit theaters, is a fine one. The new house is beautifully decorated and cost, completed, about $50,000. The house seats 1,300 people, and will play high-class moving pictures at 10, 15, 25 and 35 cents. The same firm controls the Marx Theater, offering motion pictures and vaudeville. In addition to the Majestic and Marx theaters Wyandotte boasts of three other theaters. These are the new Temple, recently completed at a cost of $20,000; the new Lincoln, a $15,000 house, now under construction, and the Wyandotte Theater, a small house.”

The small Wyandotte Theatre on the list is not the house of that name listed at Cinema Treasures, which originally had 1,200 seats and opened in 1938.

There is a possibility that the Temple Theatre on the list was in the Odd Fellows Temple, built in 1911 and later converted into a Masonic Temple before finally being converted to a performing arts space now called the James R. DeSana Center for Arts and Culture. However, the DeSana’s web site doesn’t say anything about the building having been a movie theater at any time, nor have I found any other sources indicating that it was, so that’s only speculative.

I’ve found no other mentions of the Lincoln Theatre. There is of course always the possibility that either the Lincoln or the Temple was an earlier name of the house that was in operation by 1928 as the Rialto Theatre. Local newspaper archives might have some clues, if someone has access to them.