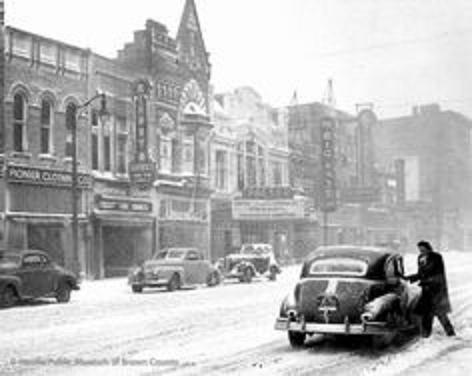 The five theaters listed at Green Bay in the 1939 Film Daily Yearbook included a 700-seat Grand Theatre. In 1940, the Grand vanishes and the 700-seat Packer appears. I suspect a name change.

The August 28, 1915, issue of The Moving Picture World said that August 10 had been set as the tentative opening date of the New Grand Theatre in Green Bay. The “New Theaters” column of the September 25, 1915, issue of The Billboard says: “The Grand Theater, Green Bay, Wis., a new $75,000 moving picture house, has been opened.”

I haven’t been able to find any specific source saying that the Grand Theatre became the Packer, but neither have I found anything saying that a new theater was built in Green Bay in 1939 or 1940. A renovation and name change seems the most likely event.

Is/was this the same as the Grand Colonial Theatre?

The book “The Encyclopedia of the American Theatre Organ” by David Junchen, lists a Seeburg-Smith theatre pipe organ having been installed in a “Grand Colonial Th.” in Green Bay, Wisconsin, in 1917.

The size of the organ (# of manuals, # of ranks) is not given in the book, but here is the info on the blower: serial F317, 1 horsepower, supplying 10" of static air pressure.

Does anybody know what happened to this theatre/building and/or organ? Thanks!

In 1916, the February 12 issue of The Moving Picture World mentioned both the Grand and Colonial Theatres in Green Bay in one paragraph. They were apparently under the same management, as the item said: “The Triangle program was switched to the Colonial in Green Bay, Wis., while ‘The Birth of a Nation’ was at the Grand.”

If the two houses were owned by the same company it’s possible that both theater names would have appeared on the company letterhead, in which case the organ might have been installed in either house. The Colonial was an older house, in operation by 1913, and slightly smaller at 650 seats, but I haven’t found an address for it, nor do I know its fate.

There are a couple of references to an Edward Benjli who was the organist at the Colonial in the early 1920s (he later became manager of both the Colonial and the Grand) so the Colonial definitely had an organ. Both the Grand and Colonial were Fox Midwesco houses by the late 1920s.

This reopened as Packer on October 6th, 1939. Its grand opening ad can be found in the photo section.

The Grand Theatre replaced the former Comet Theatre which was razed. The Grand launched August 25, 1915 with “The Heart of a Painted Woman.” Fox dropped the house and, after a period of independent operation, Standard Theatres took on the house renaming it the Packer Theatre on October 7, 1939. Bathed in the NFL' team’s green and gold, the Packer was given a streamline moderne makeover. It relaunched as the Pix Theatre on November 3, 1950. The Pix closed in 1954. In 1955, the space was retrofitted as an Osco Drugs retail store.