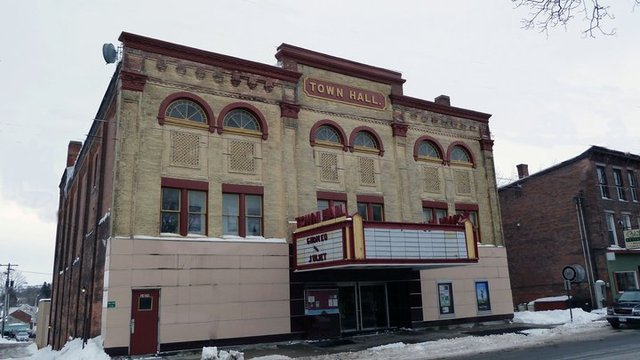 The Town Hall Theater was originally an opera house, a USO club and a silent movie house that opened on May 6, 1926. In 1949 the building was purchased by motion picture pioneer Earnest J. Wolf after his Bijou Theater in town burned to the ground.

Earnest hired a well known architect Michael De Angelis of Rochester to design the theater remodeling. The interior was designed and painted by the famous Oscar Gias of New York City. Anselm Cannan of Lowville was in charge of the construction work. It was heralded as the most outstanding and beautiful theater in Northern New York. Nick and Rena Giannocous purchased the theater from the Wolf family in 1957. The O'Brien family purchased from Nick and Rena in September of 1990.

Contributed by Patrick A. O' Brien
Get Movie Tickets & Showtimes

Just read that you are about an hour north of Utica. Will let you know if we come your way.

It looks like a nifty little theatre, both inside and out. Too bad that the powers-that-be chose to demolish it instead of doing what they could do to save it from the wrecking ball.

Patrick: I just printed out the article that you posted on September 7. Would love to see your DeAngelis designed theatre someday. Please email me at at your convenience to set up a possible tour. Current plans later this Fall are to see the Strand in Brockport NY which is also a DeAngelis theatre.

The Town Hall Theater has beat the odds and has made a successful transition to digital projection. We installed a brand new silver screen in 2011 followed in 2012 by installation of a Chrisitie series II projector, new surround sound and realD 3D.

Digitized archives of the Journal and Republican and Lowville Times pinpoint the opening of the Opera House to May 6, 1926.

A Lowville Opera House was mentioned in the March 18, 1916, issue of The Moving Picture World. It was one of several theaters that had been leased or managed by George A. Hickey, recently named manager of the Triangle company’s Buffalo film exchange, so the house must have been showing movies at least part of the time prior to 1916

Plate 5, on page 15 of Maggie Valentine’s The Show Starts on the Sidewalk has a ca. 1900 photo of the Lowville Opera House.

An advertisement for architectural firm Leon H.Lempert & Son in the 1906-1907 edition of Julius Cahn’s Official Theatrical Guide lists the “Town Hall (Opera House), Lowville, N.Y.” as one of the firm’s projects.

An item from the Lowville Journal Republican in mid-1899 said that initial bids for construction of the Town Hall had come in over estimates, and that architect Lempert had subsequently altered the plans, scaling back some features, including reducing the size of the stage from 39x64 feet to 26x64 feet.

The theater appears to have been called both Town Hall and Lowville Opera House, or just Opera House, interchangeably for several decades, but the latter appeared in the local newspaper most frequently.

Forgot to put a link to the Google Books Preview of Maggie Valentine’s book.

A book published in 1902 describes the Town Hall and Opera House in Lowville, built in 1899 and designed by Leon H. Lempert & Son:

“This building was built at the expense of the town by virtue of a special act of the legislature, and a large majority vote of the electors of the town, in 1899, at a cost of about $25,000. By virtue of said act of the legislature the management was vested in the town board, consisting of Ira Sharp, supervisor, W. H. Egleton, Jay C. Bardo, L. B. Searls and Frank E. Groodell, justices of the peace, and a committee consisting of George Sherwood, Charles S. Mereness, E. S. K. Merrell, Eugene Arthur and Julian H. Wood.

“The building is constructed so as to be used for town hall and opera house purposes. It is said to be one of the best opera houses in this section of the country. It has a seating capacity of about 1,000. It is built of brick of various colors. The scenery and stage are fine, and has grand electric illumination. It is in the interior one of the most beautifully finished buildings in Northern New York, and furnishes a place for fun, entertainment, pleasure and instruction.”The facade of the building above the first floor appears to still be pretty much as Lempert designed it, but the interior was completely remodeled by Michael DeAngelis in 1949, along with the ground floor exterior. Here is a fresh link to the December 3, 1949, Boxoffice article about the remodeling, to replace the dead link in one of my earlier comments.

I visited this theatre in the late 1970’s. One of the things that impressed me most was the attendance. Despite hundreds theatres closing form the 50’s through the 70’s, the Town Hall was nearly full on the night I attended. I asked a theatre worker to explain this phenomenon. She said “Lots of wealthy farmers in the area.”