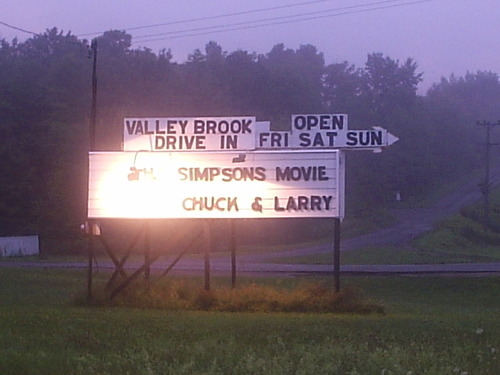 The Valley Brook Drive-In was opened on May 30, 1952 with Bing Crosby in “Here Comes the Grooms” & Gene Autry in “Gene Autry and the Mounties”. Open weekends in spring and fall; seven nights a week in summer. Located halfway between Utica and Watertown near Adirondack State Park. Parks 400 cars. Projection: Digital.

All of my old references list the Valley Brook under Lowville, which is about 10 miles northwest. Its Facebook page claims Grieg, two miles east (maybe a mailing address?), and Google uses Lyons Falls, four miles south.

The 1952 Theatre Catalog listed the Valley Brook as owned by Robert Matuszezaka, capacity 300 cars. The 1955-56 edition added Sid Swore as another owner.

The 1953-54 Motion Picture Almanac also lists it as owner R. Matuszozack, capacity 350. It stayed that way through 1966, except capacity dropped to 300. By the 1980 edition, the owner had evolved to Matuszcak, and that’s how it stayed through the MPA’s final list in 1988.

Wikipedia has an entry for Lowville-born, first-team All-American (1939) quarterback Walter Matuszczak, “who later changed the spelling of his last name to Matuszak”. So that might be what was going on with the MPAs.

The Matuszczak family tree copied a 1990 obituary from the Watertown Daily Times for Robert Michael Matuszczak (1928-1989). “He helped his parents operated their … farm until he was afflicted with polio (in 1950). In 1952, he designed and built with his father (Michael Matuszczak) the Valley Brook Drive-In Theater. The drive-in is still operated by his family.” They also owned a Lowville liquor store but sold it in 1974 and retired to Florida. I’d guess that someone else in the family took over the Valley Brook by that point.

As of a 2013 Daily Times article, the owner was Michael Dekin. From the photo in the article, he’s old enough to be Michael D. Dekin, son of Robert’s younger sister Dorothy Matuszczak, who married Donald Dekin in 1961.

Huh! The Journal of Ogdensburg and NNY Living indicate that it is Michael D. Dekin, but he’s the grandson of the founder, not his nephew.

From The Journal: “Mr. Dekin said he came to run the family business after his graduation from Carthage High School in 1983.” His “grandparents” called and asked him to run the place, so “he took a crash course in operating the equipment from Don Mulligan of Marcy Drive-in”.

Okay, I think I might have it figured out. According to the 1996 Watertown Daily Times obituary for Robert’s mom, Bessie Matuszczak, her husband Michael was the one who designed and built the drive-in along with his son Robert. The couple owned the Valley Brook “for 35 years”.

After Michael passed away in March 1987, Bessie “continued to operate the drive-in until 1990, when her daughter and family took over the business.”

So if Michael Matuszczak is the true founder, that explains how Michael D. Dekin is the founder’s grandson.

The Watertown Daily Times of July 15, 2014 said that the Valley Brook had converted to digital earlier that year and that its capacity is 400 cars, although it more commonly draws 80-150 vehicles per night.

On Page A7 of that newspaper was a sidebar that began: The Valley Brook Drive-In theater has been a family business since it opened 62 years ago.

Mr. Dekin once ran the business with his mother, Dorothy Dekin, and his sister, Bernice Noody. But Ms. Noody passed away in 2006, and Mrs. Dekin has ongoing medical … and that’s all I could read without paying extra. :)