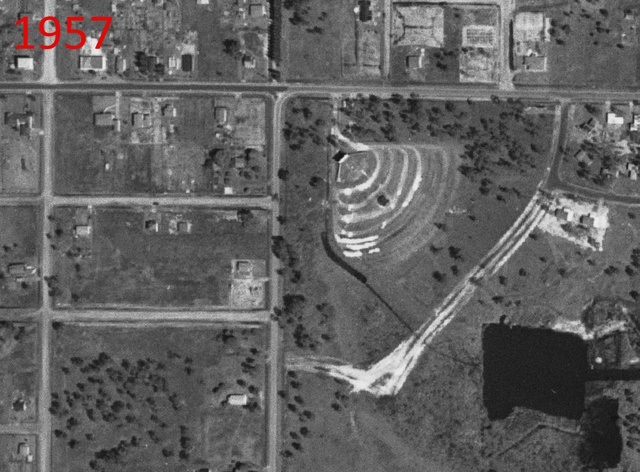 African-American audiences in Orlando were treated to second run double features at the Carver Theatre, Lincoln Theatre and the 200-car capacity, Washington Shores Drive-In. Owned by B.H. Evans, a local African-American businessman who later built a Sunoco service station right across the road on Columbia Street. The Washington Shores Drive-In opened June 14, 1950 with Barbara Stanwyck in “East Side, West Side”. It was closed on April 28, 1961. It was demolished by 1969.

A bunch of us teenagers would pile in the trunk on $1 a carload night and emerge once the car was parked. The drive-in was surrounded by woods so it was also easy to sneak in by foot, then sit on a bench right in front of the huge outdoor screen where youngsters fought over seats and losers wound up on the ground.

The concession stand sold an amazing variety of greasy food and smoke rings to chase away mosquitoes that ate you alive in the summer. You froze in the winter when engines often idled with the heaters blasting. During the rainy season the parking lot was transformed into a swamp and cars often got stuck. Horns blew when there were problems with the projectors.

Before Johnson Village was built in the mid-1950’s, there was nothing but pine trees separating our house (next to the Smith Center) from the drive-in which allowed me - and my overnight friends - to see (if not hear) the screen from my back bedroom window. Vineland Road was still a two lane black top with two cars an hour which made it easy to count cars while waiting for my mother to come home.

I have uploaded an aerial of the drive-in. It was on the outskirts of town back in 1952.

Thank you for the wonderful aerial view of the Washington Shores Drive-In Theater. Are you from Orlando? We moved on Vineland Road in 1950 and I never heard anyone refer to our community as Roosevelt Park. Washington Park was the common name of this rural colored section outside the city limits of the segregated “City Beautiful”. It was actually quite “Third World” by today’s standards.

Does anyone remember the Cameo Theater on Mills in Colonialtown that closed in 1949? It is being restored and the young architect is looking for pictures of the original building.

This opened on June 14th, 1950. I uploaded the grand opening ad in the photo section for this theatre.

Demolished by 1969, most of the site is now an empty field with a couple of shops built in the north west corner.

Believe it or not, parts of the exit road and concession stand foundation ARE STILL THERE behind the Conoco gas station!

I’m not sure what the single wall foundation is that is located near where the projection booth/concession stand used to be, but it does not appear in any aerial photos until 1999. So, whatever it is, it has nothing to do with the drive-in.

Can’t say exactly when the drive-in closed, but the 1969 aerial indicates that it had been demolished for some time. Everything, including the entrance and exit roads are overgrown which generally takes a few years.

The Washington Shores Drive-In was opened by Byron L. Kimball and Donald A. Harris. It was opened as a colored drive-In theatre with 200 car capacity. In looking at early IMPA’s, Floyd Stowe and Harold DeGraw are listed as owners or bookers for the drive-in. In 1960, Jack & N. Robinson are listed as owners or bookers for the drive-in. On October 11, 1950, the drive-in closed with no reason given. Then on December 22, 1950 it reopened again. In August of 1953, George J. Yarbrough (19) was listed as ½ owner of the drive-in. He designed a way to synchronize two projectors for 3-D movies. He started United Film Productions in the early 1960’s. I don’t know where B.H. Evans was in the ownership chain per Samuel Augustus Jennings? Maybe he was partner in the drive-in? In February of 1955, Harold DeGraw from Cambridge, Maryland bought the drive-in from Donald A. Harris. DeGraw rebuilt the drive-in with a new snack bar, restrooms, and upgraded the sound and projection equipment. He also planned to install a Cinema-Scope screen. In August of 1958, Leon Peters from Cambridge, Maryland was named the manager of the drive-in.

William W. Arnold, attorney for De Gray Theatre Corporation, wanted get the property rezoned for construction of a 72 unit apartment building, but it was tabled for further study in December of 1960. In March of 1961, the property was put for sale and it was noted it would be an ideal site for a bowling alley. The last movie to be screened at the Washington Shores Drive-In was on April 28, 1961. In June of 1961, the property was put up for sale again this time, listed as a drive-in theatre. H.C. Babcock, realtor, was asking $33,000 which included equipment and property. It did get sold to an unknown person. On June 27th, 1961 the DeGraw Theatre Corporation was dissolved and no more. On January 2, 1962, three children had broken in to the concession stand and projection room and started a fire which gutted the building. While looking at a current Goggle Map where the drive-in was located, you can see that it is still undeveloped yet. It does have houses and business built on outside of the property.