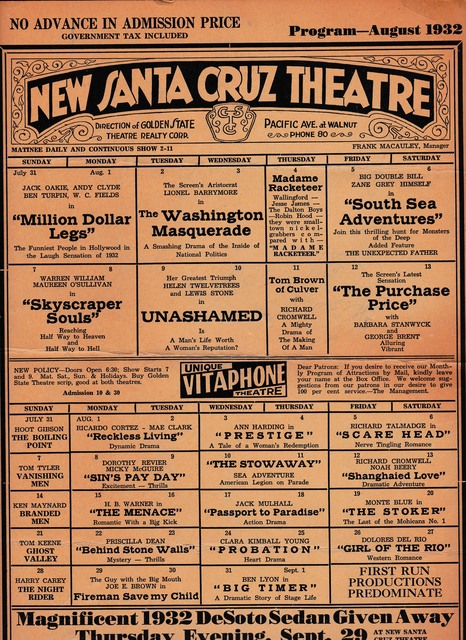 The work of Reid Bros. architectural firm for the Golden State chain, the New Santa Cruz Theatre, which opened in 1920 (and shortened later to Santa Cruz Theatre, likely after the much grander Del Mar Theatre opened down the street in 1936) had an overall simple Beaux-Arts look inside and out.

This changed with a fine Moderne remodeling in 1939. It featured a beuatiful neon tower modeled after those at the Golden Gate Exposition.

“When I first saw this theatre in 1973, it had been an office and retail building for several years, but the tower still remained.” Sadly, this was removed a few years later, though the building is slightly recognizable as a theatre, and a sign near the entrance to the offices above gives a short history.

This theatre initially contained a 2 manual 7 rank Wurlitzer style 185. The organ was destroyed by fire in 1925. This organ was replaced with a 3 manual 9 rank Robert Morton in 1925. Famed local silent film organist Alta Pearl Turner played both of these instruments as well as theatre organs in the Salinas and Watsonville area.

The Robert Morton organ was removed decades ago and is now in the hands of a private owner. The console from this organ is now installed at the Kautz Ironstone Winery in Murphys, CA. In the Alhambra Room of the winery, the New Santa Cruz Theatre Morton console controls the Robert Morton organ from the Alhambra Theatre in Sacramento. This organ was installed at the Kautz Winery in 1994.

I walk by that building all the time and never wouldve thought it a theater except for the plaque. Just makes it all the more poignant that the Del Mar is being restored.

If you walk to the back of the building and look at the back side and the added windows on the side in the cement you will see this was a theatre. If anyone is around this spot look in the office building next door on the right, they have a nice photo of the neon tower that was out front, to bad they took It off I think in the 70’s. Maybe someday someone will pull out the offices and cafe and turn the place back into a theatre. The new Regal 9 up the street tried to copy the Santa Cruz Theatre’s tall tower sign. It looks good but not the same as the art deco one that was removed. Thanks to Jim at the Del Mar Theatre down the street that is up and running with the restored neon marquee after the former owner United Artist Theatres stripped most of the neon off and put a wall down the middle. Visit the Del Mar if your in the Santa Cruz area. Check out the waterfall curtains with red/purple lights in the big downstairs cinema now back to one piece.

To confirm Terry’s post above: The 1939 entrance tower on the Santa Cruz was removed in 1977 when the building underwent further post-theatre remodeling. Interestingly, this was the same year the Del Mar was quadded. I remember the tower being on the building when I first saw it in the early 70s. The sheet metal star and crescent moon band still ran around the top, but the marquee and all neon on the building was long gone. The whole building was painted olive drab. Today, the metal vertical fins elsewhere on the building’s facade still exist, and you can see little plugged holes where neon once hooked-in. the tubes were originally hidden behind “sleeves” or “fins” of sheet metal. The only visible tubing was on the marquee proper (and for a time, an older vertical sign over the theatre’s original Pacific Ave. entrance, visible in the photo at the top of the page). All else was indeirect light glowing out from behind sheet metal flashing. The effect was magical, if photos taken at the time are any indication. Very recently, the building has been given another paint job, nicely accenting the surviving architectural detailing.

From the 1940s a postcard view of the Santa Cruz in Santa Cruz.

The 1929 Film Daily Yearbook lists the “New Santa Cruz” as having 1,100 seats. As many of you know, sometimes seat numbers were adjusted in reality, and sometimes the numbers were “stretched.”