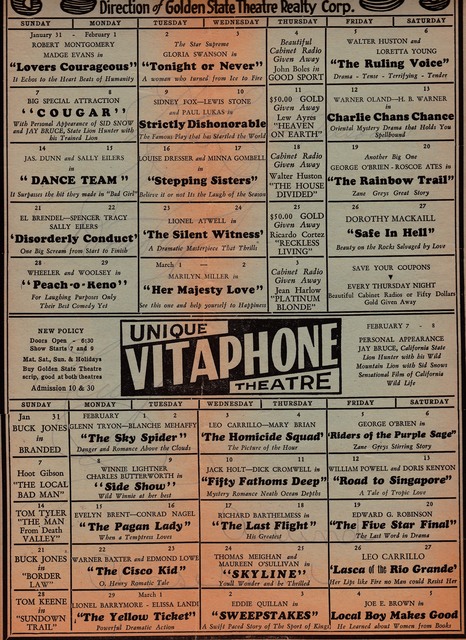 This theater stood on the property immediately to the North of the Del Mar Theatre on Pacific Avenue between the terminus of Soquel Avenue and the crossing of Cathcart Street.

It opened as Swain’s Theatre in the very late Nineteenth Century, named after actor, Mack Swain. The facade had a simple entrance with no marquee canopy. "SWAIN’S THEATRE" was written above the entrance in lightbulbs. Three circular windows–the center one a bit larger than the other two–looked out over Pacific Avenue from the second story. Around these windows was ornamental plaster filagree, which could loosely be termed Art Nouveau. Above this was a more typical Neo-Classical cornice.

The theater originally featured legitimate theater and vaudeville. By at least the 1920’s, movies were the main fare, and the name had changed to Unique Theatre. The Unique Theatre was later given a traditional vertical sign and rectangular marquee. The latter featured lightbulb tracery which had a slight Art Nouveau flare. When the Del Mar Theatre opened next door in 1936, the Unique Theatre closed.

A photograph taken on the date of the Del Mar’s opening shows the two theaters standing side-by-side. Within the year, the Unique Theatre was gone, and the street frontage was replaced by a one story, aqua and grey terra cotta clad Art Deco commercial building which still stands today.

A little more information on the Unique can be gleaned from “The Sidewalk Companion to Santa Cruz Architecture,” a paperback guide which was published in the late 1970s, and may still be available used. The book also contains a photo of the facade when it was Swain’s. On adjacent pages are descriptions (and photos) of the Santa Cruz and Del Mar theaters.

A picture of a handbill for a showing at the Unique Theater: http://tinyurl.com/4myujpr

Great handbill! Thanks for posting it. Of the businesses listed as sponsors of the film event at the Unique, the Santa Cruz Sentinel is still in business. The Brown’s Bulb Ranch and Brown Ranch in Capitola lasted until well into the 1970s, when the land was taken over by the Capitola Mall.

The Unique had another name before Mack Swain bought it around 1906-1907. It was called the Alisky Theatre, and was operated by Charles W. Alisky, who also had an eponymous theater in Sacramento.

Edward E. Prince, who lived in Santa Cruz from June 21, 1910, to December 16, 1911, mentioned attending local theaters in his diary. He attended both the Unique and the Jewel Theatres on September 24, 1910, and saw the Jeffries-Johnson fight pictures at the Unique on November 5 that same year. He didn’t mention the Unique in his 1911 diary.

If this theater was called the Unique in 1905, and was the same house as Swain’s Theatre, which was listed in the 1908 Henry Guide, then it must have been called the Unique both before and after being called Swain’s.