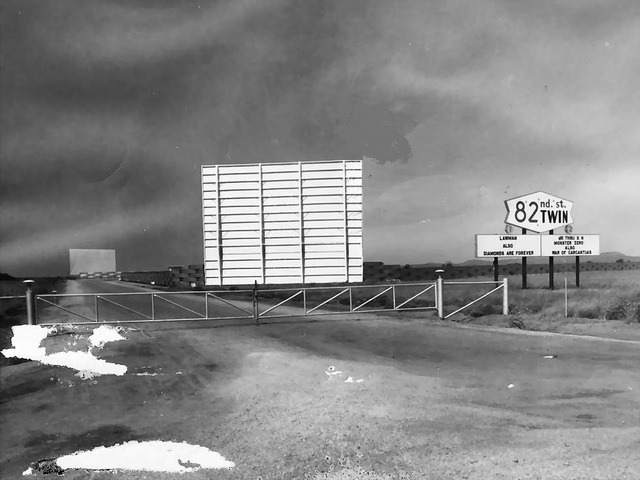 This useful information has been borrowed from the roadsideoklahoma web site.
"Notes: This theater can very faintly be made out from aerial photographs. Both screens appeared to have been on the south corners of the lot - one on the SE corner and one on the SW corner. An exploration of the property reveals only a bit of gravel and some very faint parking rows. Nature will soon make this theater disappear forever."

It had a soft opening on October 13, 1971 with Doris Day in “With Six You Get Eggroll” with free admission. The official opening was on October 14, 1971 with Martin Balsam in “Tora, Tora, Tora” & Dan Blocker in “The Cockeyed Cowboys of Calico County”. It was later twinned and closed in 1985.

The 25-year old Austin Drive-In was in the portfolio at its final years of the Video Independent Theatre (VIT) Circuit. It ceased operations of the Austin on October 12, 1971 and many of the employees reported for work at the Austin’s replacement, VIT’s new 82nd Street Twin Drive-In which opened on October 13, 1971 with a free showing of “"With Six You Get Eggroll.” The theatre then had its official Grand Opening the next night with “Tora, Tora, Tora.” The $200,000 twin had two 40'x100' screens.