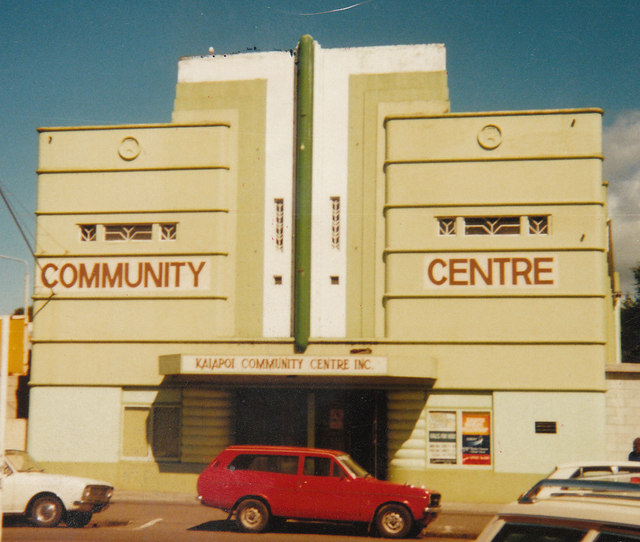 The Rialto Theatre, designed by architect Colin C. Lamb was opened on December 17, 1935 with Shirley Temple in “The Little Colonel”. In 1951 it is listed with 204 seats and operated as an independent theatre by H.O. Hills.

After closing as a movie theatre the building was used as a community centre until 1997. The building then became home to a church. It suffered earthquake damage on 3rd September 2010, and in January 2011, awaited demolition. It was demolished in late-2011.

On 14 May 1989, after a 6-month refit by Nick Paris, Richard Porter & John Leonard in which the projectors, lenses, screen and circle seating were all replaced, the cinema re-opened for business with Scrooged (1988) starring Bill Murray. There was now a 28 feet CinemaScope screen but the original green curtain from 1935 was still there. From 21 April 1991 to March 1993 the cinema was operated by Richard & Marion Porter.
For further details on this cinema’s history, please e-mail:
richard_chchnz AT hotmail.com
Contributed by Richard Porter.

Following the Christchurch earthquake of September 3, 2010, thuis cinema was damaged and as a result now faces demolision.

The Rialto is to be demolished by the Council. It has suffered badly with two large cracks up the front of the building.

Has since been demolished