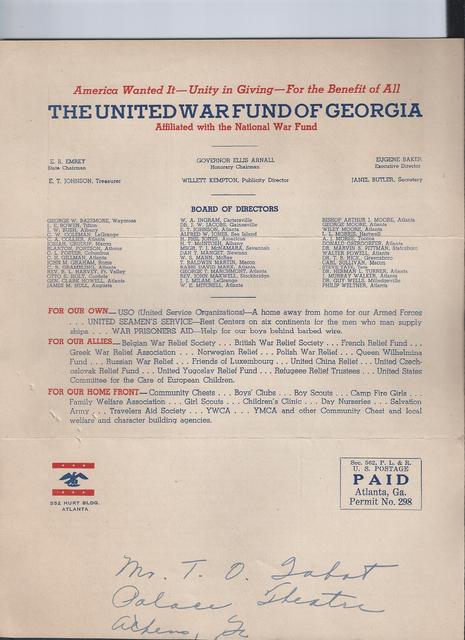 Yeah,I should have taken a few since no one in Athens ever gets on CT.

Summer Prices for the PALACE 1 and 2 Theatres will be “BLUE THUNDER” at $4,00 a seat and Child $2.00 a seat, “SUPERMAN” has Adults paying $4.00 a seat, but the kids tickets go up to $2,50 a seat.This from the 1983 Knoxville Home Office admission Prices Memo.Still under the Plitt banner.

Any old employees can check out REMEMBERING PLITT THEATRES on Facebook,Great place to see for old theatre folks in the real days of the Theatre Business.

The Film Daily of February 9, 1921, said that the Palace Theatre in Athens had opened on February 1. The Palace was a Loew’s house.

It was still going strong with first run pics in the late 60’s. My wife and I attended this theater often.

At the 1921 opening there was a II/10 Moller pipe organ to accompany the silent pictures. While Loews was spending a lot of money on new buildings just after World War I, they skimped on their organs, buying Mollers instead of the more expensive makes. In larger markets many of Loew’s Mollers were replaced after just a few years. Here in Athens it seems the Moller survived to the sound era, at which point Loews fired all their organists and left to the organs to the mice. There is no record of what became of this one but it would not be unusual if it went to the landfill.

I created a Facebook group tonight on the 100th anniversary of the Palace theatre Grand opening Feb 7, 1921. To find the group search Palace theatre Films Athens,Ga 1921-87 or use the link below I’m having an event Watch for the very first film the Mark of Zorro 1920. https://www.facebook.com/groups/333343894627252/?ref=share

Numerous items in trade journals starting in the mid-1930s indicate that the Palace at Athens was then a Lucas & Jenkins house. A July 13, 1935 Motion Picture Herald item noted that Paramount partners L&J had just taken over two houses at Athens. The item didn’t give the names of the theaters, but the Palace was likely one of them. Lucas and Jenkins didn’t enter the theater business until 1934, when they took control of the Atlanta Fox.