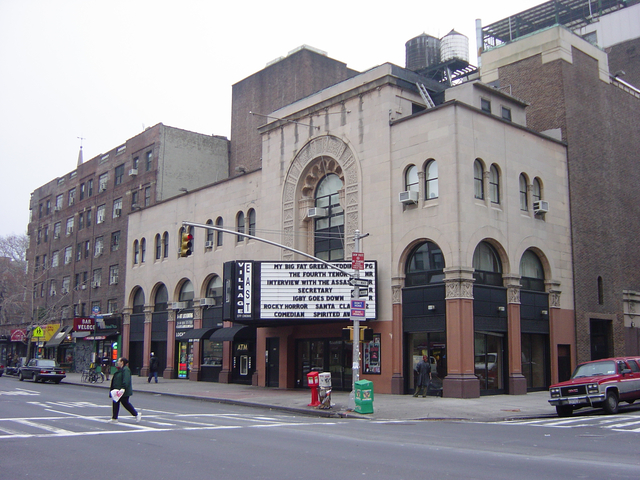 City Cinema’s beautifully restored Village East was once the home of Yiddish theatre in its original auditorium which had 1,252 seats in orchestra & balcony levels. Legend has it that Walter Matthau began his show business career here as a young boy working at the concession counter.

Built in 1925 and opening in 1926, its past is still evident in the Moorish style designs that adorn the outside of the theatre and inside, which are the work of interior designer William Pogany. The ticket lobby has an ornate ceiling and the main lobby that has a concession stand is very ornate, including the ceiling and has Yiddish writing in the decoration. The ornate decorations extend to the exits to the outside, and there are two grand stairways which lead to the balcony of the auditorium where a large Star of David in the domed ceiling further infuse atmosphere into the historic building. By the late-1930’s it was operating as a movie theatre, named Century Theatre (listed as closed in 1941 & 1943). Then reopened as a Yiddish theatre until 1945. By 1950, it had reopened as a movie theatre renamed Stuyvesant Theatre, with a seating capacity for 1,082.

In 1971 a short run ‘off-Broadway’ production of “Grease” was performed here before transferring to Broadway where it ran for 9 years (3,388 performances). On November 18, 1981 until January 24, 1982 a pre-Broadway production of “Joseph and the Amazing Technicolor Dreamcoat” was performed at the then renamed Entermedia Theatre prior to its Broadway transfer to the Royale Theatre where it ran for 747 performances and winning several Tony Awards.

The movie theatre also hosted dance, concerts & movies until it closed as a single auditorium in 1988. It reopened as the Village East Cinema on February 21, 1991 as a 7-screen movie theatre. Today in the basement below the original ornate auditorium and lobby, four screening rooms have been added in what was originally the orchestra seating area. Seating here is provided in Screen 2;187, Screen 3;179, Screen 4;130 and Screen 5;66. A further two screens have been added on the former stage area of the theatre, which are stacked one on top of the other, Screen 6;145 & Screen 7;174. The screen on top has wonderful stadium seating, a decent size screen, and is a very nice theatre in itself, with exposed brickwork and some character. However, it is not as beautiful as the main 440-seat Screen 1 auditorium which is located in the former balcony, with stairs down to a lower floor inserted over the circle void where there are 40 seats. As of 2017 this auditorium has 365 seats.

With New York City’s lack of a still-operating historic movie palace, the Village East is the closest thing around. The theatre is listed on both the State & National Historic Registers and its façade and interior, including the lobby and domed auditorium, are designated New York City Landmarks. In 2015 the historic main auditorium’s magnificent plaster ceiling was restored.

In February 2021 it was renamed Village East by Angelika.

The theatre was playing one film about Glenn Gould.

There’s a great article with a photo gallery at:

The very ornate ceiling is quite amazing and unique!

Wonder if Tenet will play here in 70mm as part of select cities on Labor Day weekend before opening at more cinemas in the weeks ahead.

only if the governor allows the theatre to open

Tenet will be shown Friday in 70MM on March 5. Tickets on sail

Thanks, Ed. In March of this year, I returned for the 70mm screening of “Murder on the Nile” and I posted photos in the photo gallery, of this beautiful theater.