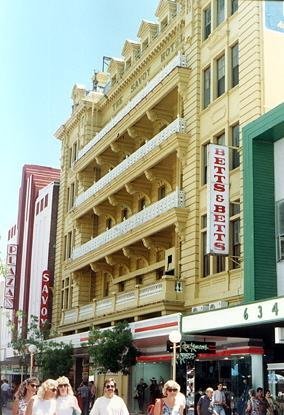 Located in the basement of the Heritage listed Savoy Hotel, which was built in 1912. The space was originally a billiard hall, and was converted into the Savoy Newreel Theatrette which opened 23rd December 1955. It operated as a newsreel theatre, also screening short subjects and cartoons, in one hour long programmes.

Due to the arrival of television, the Savoy Theatrette went over to screening full length feature films from mid-1959. In 1975, the programming policy changed to R-Rated adult films. It was closed in August 1991.

The Savoy can be seen adjacent to the former Plaza Theatre in this June 2009 photograph:
http://www.flickr.com/photos/wyrmworld/3657135058/

The Savoy Theatrette opened on 23/12/1955,and closed in 1991 and the equipment moved to the Club X cinema in Barrack Street.

I think the Savoy Hotel and Theatrette may have been heritage listed(date unknown?)?

In March 1954 Lionel Hart established Independent Film Distributors & opened “The Liberty” in Barrack Street, with 450 seats on a single upper level; The theatre initially specialized in a Continental Art film policy. Independent Film Distributors subsequently established a second theatre on 23 December 1955, which was named “The Savoy” Newsreel Theatrette, and was located in the basement of the Savoy Hotel in Hay Street, in what was previously a billiard saloon. The Savoy ran in competition to the all ready long established, and very successful, Mayfair Newsreel Theatrette, also in Hay Street City.

The 300 seat Savoy ran continuous “hour shows”, that is programmes of not less than an hour (though frequently slightly more), starting at 10 am and continuing without a break until approximately 11 pm, allowing patrons to enter and leave as they pleased, and to stay as long as they wished, its appeal was particularly to shoppers and others with a short time to spare in the city, so it advertised nursery, powder rooms, free cloak and parcel depository.

The introduction of television

The introduction of television brought this to an end, by providing similar programmes free in viewers' own lounge rooms. So, at the Savoy, continuous programming of re-runs of successful feature films replaced the newsreel format; for example in January 1964 seven sessions per day of a Three Stooges' film, in January 1965 eight sessions per day of East of Eden. Even this was difficult to sustain, and the cinema drifted more and more into sensational programming, after the success of films such as London in the Raw, presented in June 1965, to which children under 16 were not admitted. By the time of the “R” certificate legislation in 1972, the Savoy had a reputation for rather risque product, and in 1975 was one of the first cinemas to convert to a policy of screening only R-rated movies, a policy with which it was very successful until the early 1980s.

It closed briefly in 1983, then reverted to more conventional programming when taken over by John Marsden later that year, re-opening on 17 November 1983; when Marsden had difficulties with film supply, he sold it to Ken Hill who installed video projection and in February 1987 began to run it as an adult cinema, with topless usherettes. The cinema closed in August 1991 and its equipment moved to Club X Cinema in the basement of the Club Emporium in Barrack Street.

In 1997, the building that housed the old Savoy was still there, but the cinema staircase and entrance had been demolished, and shops extended across these gaps; access was still possible from the lane way behind to the derelict interior, as it was with the rest of the Savoy Hotel – Contributed by Greg Lynch –

The seats and snack bar(and ticket office?) have been removed. There is also a hole in the Cinemascope screen(exposing the speaker stand), the frame of the screen and the curtains are still there too. The projection room(and projection portholes) and the gentlemens toilet(and ladies toilet?) are still there too.

The Savoy Hotel has it’s page on Wikipedia, including a section on the Savoy Theatrette.