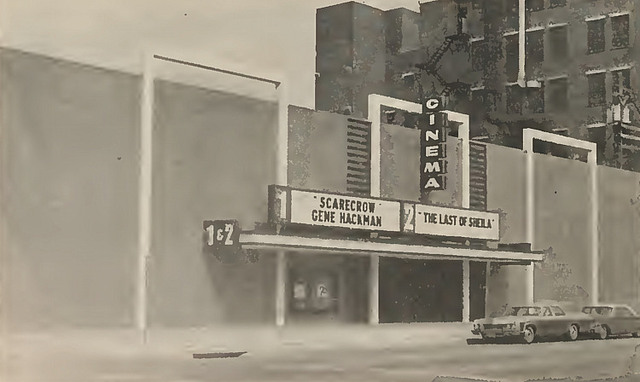 Archives of the Lincoln Star from 1971 say that to prepare for the impending demolition of the Varsity Theatre, which began in April of 1973, manager Walt Jancke was opening the Cinemas 1 & 2 a block away from the Varsity on September 17, 1971.

Jancke said he could have put 300 seats in each auditorium but in the interest of patron comfort, he put only 270. He said that the chair spacing ‘back to back’ was 38 inches. Another feature for patron comfort was five air conditioners with separate controls to control the airflow. The opening films were “Summer of ‘42” and “Le Mans”. A week later Jancke reported that “Summer of '42” had been sold out since it opened. “Summer of '42” eventually ended up playing until December 24, 1971.

The Star announced on January 8, 1975 that the Nebraska Theater Corp., was selling the Cinemas 1&2 and the local State Theater to Westland Theaters of Colorado.

Later editions of the Lincoln Journal Star said the theater was last called the Cinema Twin and was the corporate headquarters of Douglas Theatres. It closed on November 18, 2004 and the 14-screen Lincoln Grand opened the next day a few blocks away. In 2008 Douglas theater sites in Lincoln and Omaha were sold to Marcus Theatres.