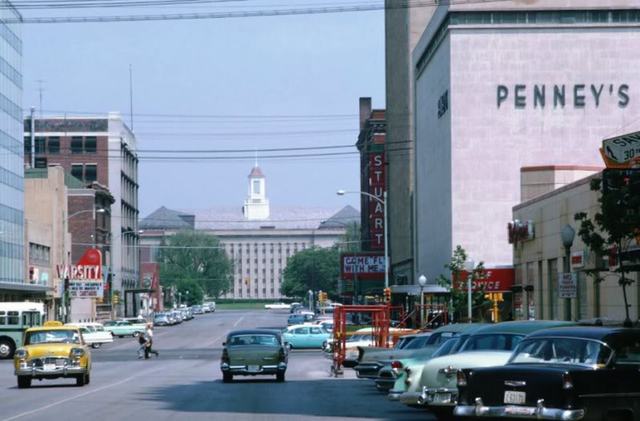 Built on the site of the Lyric Theatre(it has its own page on Cinema Treasures). The Stuart Theatre was opened June 29, 1929 with Eddie Dowling in “The Rainbow Man”. It was built for stage shows and movies. By 1943 it was operated by Paramount Pictures Inc. through their subsidiary Joe Cooper.

In the 1970’s, the theatre’s operator installed carpeting, lowered the ceilings, and covered up all of the ornamentation. By 1989 it was operated by Excellence Theatres. In the fall of 1991 it was taken over by Douglas Theaters.

The Stuart Theatre later closed and lay dormant for years.

In December 2001, the new owners peeled away the carpeting and found the original marble floors. The lowered ceiling revealed beautiful chandeliers and behind all of the walls were terrific murals, trim and ornamentation.

The owners have now built a full-service kitchen and bar and installed tables and seating.

Lincoln is just off I-80 and this is an extremely worthwhile stop for anyone facing that long drive across Nebraska.

Contributed by Ron A. Hunter
Get Movie Tickets & Showtimes

The lack of culture in the city of Lincoln laid the foundations of failure for such a spectacle, as a result the drinks at the bar were overpriced and the service poor. The spectacle of the past had no chance in the drab tear-it-down-and-build-new mentality of this sad town of the midwest, but too bad the management was too dense to notice. I suspect, at the rate the Rococo is slipping that it won’t be long before the theatre once again slips into the background of this college town. This town is known to hold a grudge, the terrible service and the elitest ideals won’t soon be forgotten. Frankly, I rather miss going to movies at the Stuart – I’d take that over this pathetic joke any day. Give me glitz and glamour of the uncovered theatre and let me enjoy a movie!

This is a great theater. The food is good and the special events are great. Cinema Treasures has the wrong web address. Here is the correct one.

A photo featuring the marquee of the Stuart is available here as part of the Charles Cushman collection.

LM’s link states that the Rococo/Stuart was built in 1929. That makes sense, as an October 1929 ad in the Lincoln Daily News has ads for the Lyric, Sun, Colonial, Rialto, Liberty and Orpheum.

According to their web page (link above) the theatre opened in 1929. The style is fairly exotic – More Moorish than Renaissance revival. Loge has table seating but balcony still has theatre seats.

As Nebraska Man pointed out in 2003, the official web site is this one. The one Cinema Treasures currently links to is a squatter using the alternate spelling “theater.”

Originally operated by Publix, the Stuart featured movies and vaudeville, and had an orchestra of 25 musicians, said by Movie Age to be the largest west of Chicago. By the late 1930s the Stuart was being operated by the Cooper Foundation. Under Cooper management the Stuart not only ran movies but occasionally hosted touring companies of Broadway shows, as well as concerts by the Omaha Symphony, among other live events. Cooper continued to operate the house until it was taken over by the Dubinsky circuit in 1972, when it was remodeled and the seating capacity reduced to less than 1000.

The Stuart Building was designed by the Lincoln architectural firm of Davis & Wilson, and as far as I’ve been able to determine there were no associated architects or firms on the project, so they must have designed the theater as well. The building was added to the National Register of Historic Places in 2003. At least one other theater, the Varsity in Lincoln, has been attributed to the firm of Davis & Wilson.

The lead architect of the firm was Ellery Davis. The University of Nebraska provides this web page about Davis, who designed many of the buildings on the University campus.

The building in the lower left corner of the 1983 photo is the Douglas 3 Theatre, which was directly across P Street north of the Stuart. Not visible in this photo is the Cinema 1&2, which was on the northwest corner of 12th and P.

The web site Encyclopedia of the Great Plains has this brief article about architects Ellery Lathrop Davis and Walter F. Wilson.