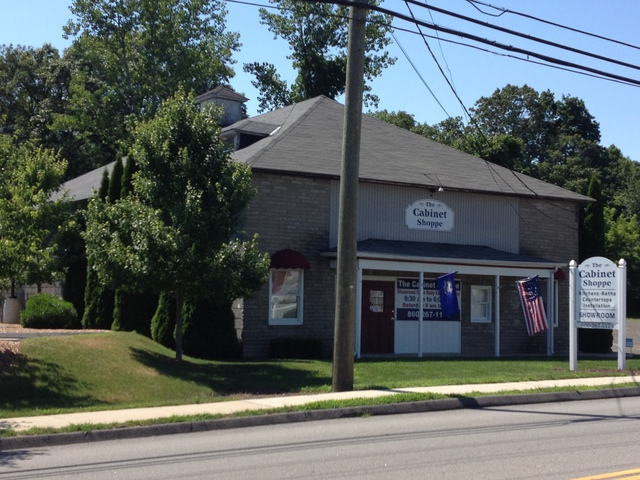 This theater is located right near a shopping center and the main drag, Route 66 near beautiful Lake Pocotopaug, a former resort community. The East Hampton Theatre was operating prior to 1941, and continued through to at least 1950.

The building is unassuming and the building next to has "Theater Square" with a large clock on its facade to give the hint.

The theater is very much intact and looks like a house. It’s one level with a raised shingled roof with an old school 4-sided turret on top. The sides are a grey siding that’s pleasing and the front has brick on both sides with the top middle having vertical grey siding just above the mini marquee/shingled entranceway with 4 small white pillars. "The Cabinet Shoppe" is just above.

It was closed when I biked past, but I put my head in and saw on the wall preserved remnants of the former theater. There’s a pressed tin ceiling, and 3 frames on the wall depict old school movie ads. One frame had an ad list with 4 titles, but I could only make out three; “Too Mary With Love” (1936), “Meet Nero Wolfe” (1936) and “Crash Donovan” (1936).