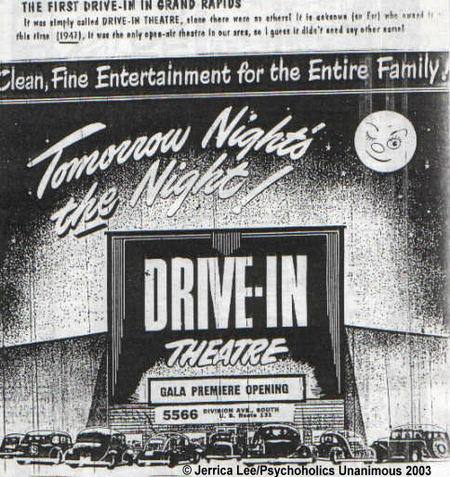 Opened as the Drive-In in May 1948, it was owned by H.J. Ochs. This was the first drive-in in the Grand Rapids area. It was later operated by Triangle Drive-In Co. and was renamed Division Drive-In. Car capacity listed at 600 with a single screen.

Later renamed Stardust Drive-In, no closing date listed but has been demolished and an RV dealer is now where the drive-in once stood.

Since it was the only drive-in in town when it opened, the original name was simply Drive-In Theater. It was renamed the Division in late 1948 or early 1949. The next name change came around 1962 when it became the Stardust.

The Stardust Drive-In restarted operation in August 1962 with Floyd Bloss as operator. The theater was not in operation before that. I became associated with Mr. Bloss shortly after that as co-operator and projectionist. At that time 2nd run family movies were shown. In 1964 it converted to x rated fare and closed in the 70’s. Mr Bloss now resides in Las Vegas. I left the business when x rated movies were played. Mr Bloss also operated the Hastings Drive-In and the Burton Capri theaters. John Whitman

The location of this business is currently in the city limits of Kentwood, several miles south of the city of Grand Rapids.