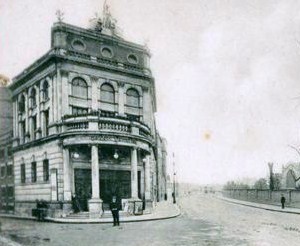 The Fulham Theatre opened on 23rd August 1897 as a live theatre. Designed by noted theatre architect W.G.R. Sprague, it had a commanding corner position on Putney Bridge Approach and Fulham High Street, in the southwest London district of Fulham. There was a portico entrance with Ionic columns, and a statue of Britannia and two hand-maidens at the top of the building.

The original capacity was for 2,239 (including standing) in orchestra, dress circle, balcony and gallery levels. This was later reduced and seating is given as 175 in the stalls, 329 in the pit, 95 in the dress circle, 135 in the balcony, 367 in the gallery and boxes which seated 31.

It was later known as the Shilling Theatre, and was frequently used as a cinema from 1912. By 1937 it had been re-named Grand Theatre and although it was used as a live theatre, it still screened films on Sundays (for one day only). The Grand Theatre was closed in 1950, and was used for storage for a while. In 1953 many scenes in the British crime film “Escape By Night” starring Bonar Colleano were filmed on location inside the Grand Theatre. After laying empty and unused, was demolished in 1958. An office block named Riverbank House was built on the site.